Gotta catch 'em all, do ya? I get it. The whole Pokémon Go thing is sweeping the globe and while there have a few scary stories surrounding the phenomenon, seeing kids - families even - getting outside, exploring, being active and having fun is pretty darn cool.  Heck, my kids and I were out in the park until almost dark yesterday evening and we met three families we'd never have known save for this fad.

I think the key to making sure that Pokémon Go doesn't just become another way for kids to get too much screen time is to plan your Poké-Time. Pokéstops can be found in some really cool places. Planning an outing at say a museum or park can include both Pokémon Go and other sorts of fun.

Catch 'em all on the National Mall

The Smithsonian museums are attracting Pokémon faster than any lure even a level twenty player could place. Double your fun and exploration by segmenting your time. The Air and Space museum is a bustling Pokémon Gym with lots to catch, even rare ones. It's also one seriously awesome museum for kids who are into STEM, SCI-fi, airplanes, space... okay, it's just plain amazing. Spend the first part of your visit catching all the Pokémon you can, grabbing eggs and leveling up. Then learn about Lindbergh, check out the lunar landing module, or even 'land' a jet fighter on the deck of an aircraft carrier. Top it all off with some ice cream on the lawn outside - yep, there are Pokémon there too!

Get some insider tips from Sergeant Nadia Tyler of Smithsonian Security. She's a huge fan, expert catcher and has some great insights on ways to make the real world connect to the Pokémon universe in this article. Some good advice from the National Park Service, "Remember to be respectful when you play and avoid looking for Pokémon at memorials."

While it would be great to spend your entire day with the kids just doing the Pokémon and playing thing at some point they're going to need to eat, go to the dentist, be clothed and all that junk. Ugh, errands. Do the kids get we loathe running around and getting things done as much as they do? We're allergic to fun, right. Pokémon to the rescue. Pull out the app in the cereal isle. Is there a Squrittle popping out behind the Pops? Pikachu has to get his teeth cleaned too. Look for the Pokémon in the mundane and before you know it your list is all checked off and you had fun doing it!

As they say, there's an app for that and in this case the app is a map that tracks where to find a treasure trove of Pokémon. Curbed has come up with a nifty community mapping program that allows players to drop a pin in the map when they find Poké Stops, Gyms and more. Users are even leaving tips on which characters were found where. Brilliant! 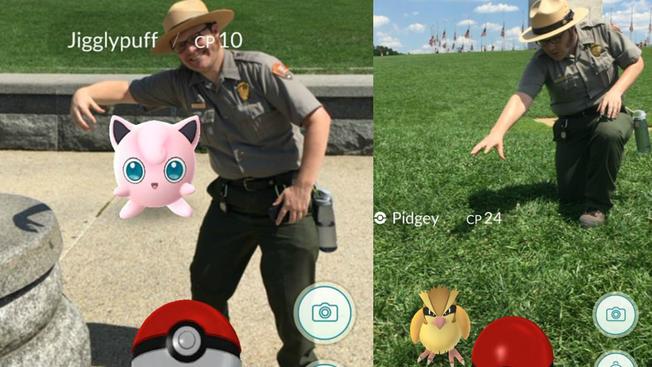 photo courtesy of the National Park Service via Facebook

Here is a short list of some rumored Pokémon hot spots in CertifiKID cities:

Atlanta - CNN, Centennial Olympic Park, World of Coca Cola (rumor has it there are tons of rare ones near here)

Tip: libraries and historical sites seem to be favorite places for Pokéstops.

Have fun out there CertifiKID families and good luck catching them all!

Reminder: Enjoy playing safely. Always be aware of your surroundings and follow the guidelines that pop up every time you open the app.