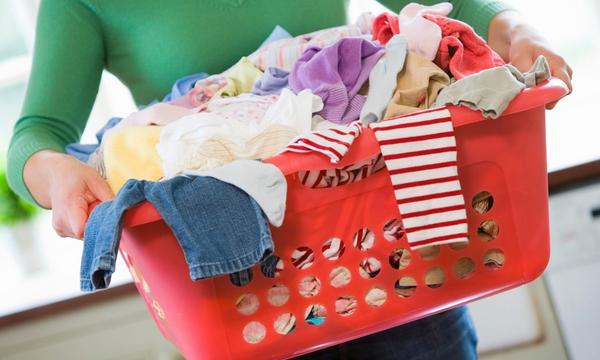 Join any comedic website or Facebook group for moms and you’re likely to see a plethora of memes regarding laundry. It’s the universal bane of parental existence. You probably thought this when you were single anyway, and now you’ve added one, two, three, (insert number here) kids, and the problem has gotten exponentially worse. At least we can commiserate, and that’s why we’ve rounded up nine reasons why laundry is the absolute worst and shared them below.

This post is sponsored by 2ULaundry.  If you live in Atlanta or Charlotte, you need (yes, need) this deal for $20 off your first 2ULaundry order.

Everyone has “The Chair”. Whether your chair holds dirty laundry, clean laundry as yet unfolded, or worse - a mixture of both - the chair exists in your home. Every time you empty it of clothing, it magically fills within mere seconds due to the faithfulness to it by everyone in your family. At this point, you wouldn’t be able to tell anyone what The Chair actually looks like, as it’s been so long since you’ve laid eyes on it.

Tide. Gain. All. Arm & Hammer. Wisk. So many detergents, so little time, and why are they all so expensive? The only way to get a deal is to buy five at Target and, on a good day, you lose only half of one container that’s spilled on its side on the ride home from the store. Then you have to store it and, well, you’re done. Don’t get us started on Tide Pods and babies, as we’ve all seen those dangers. This one is linked to cancer and that one has artificial fragrance. Stop the madness!

So. Many. Stains. And it’s not just the kids either. Coffee stains from that errant turn on the way to work or turning up the spaghetti sauce too high have made their marks. Of course, the kids’ clothes are the worst, and some days you debate whether to even spray them with stain remover or just toss them right in the garbage. And, well, underwear - that’s a story for another day (especially that pair you found under your son’s bed).

Whites. Darks. Delicates. Towels. Can’t we just throw it all in together? “No!” screams society. “Yes!” screams our desire to have any sort of life. A meme even surfaced recently that read, “I know you’re not supposed to put all your laundry into the wash together, but I’ve been doing it my whole life and nothing bad has happened yet.” And despite chuckling at it, we all still do our due separating diligence as that’s what mom taught us to do.

What’s that, you say? You’ve never done that? Do not read any articles about what could be growing in there as we speak. Just don’t. Or clean your washing machine. It’s up to you.

Does this go in the dryer? What about this? What about that? No one has clotheslines anymore. Those were the days - clothes that smelled like the great outdoors but felt like you were putting on an iron curtain when you decided to wear them. Much like with the washing process, it can be tempting to throw it all in. But when your t-shirts come out and the only family member they now fit is your five-year-old, you know you made the wrong decision. Curse you, laundry gods! And that’s not even going into the horrors of the dreaded lint trap. Let’s just say most families have a game of “What’s the weirdest thing we can find in our lint traps?” And the answers vary from bunny turds (true story) to spare change.

Yes, Marie Kondo, we get it, you’re the greatest thing to happen to folding and organizing since stacking crates but let’s face it...the average person loathes this part of the process. It starts out fine. You’ve turned on your favorite mindless show. “See, this isn’t so bad,” you think. And the pile grows. It grows! It seems impossible but the clothes have begun to revolt and are now multiplying. “Viva la Revolucion!” you even think you hear them cry in a mocking taunt. There are many false summits - you think you’re done but, nope, ten more items were waiting for you just under what you thought was the last towel. Who is that? The men in white coats coming to take you away? Fine, let them. But can they fold the laundry first?

This is really only a phase for those of us with tweens and teens, as we have to beg them to take a role in any part of the process. They will refuse despite your threats of grounding because, well, they’ve heard from you how much laundry stinks. You’ve dug your own grave. So you agree that the least they can do is to put the dirty clothes in the hamper and the clean clothes in the drawer. This never happens. In fact, you often see still-folded clothes in the hamper and, just briefly, you consider running away.

Yes, the worst was indeed saved for last as everyone knows there is nothing worse. If you’re like most people, the clean laundry might even sit in a laundry basket for days before folding. And it’s not the folding that is what’s keeping us from getting it out but, rather, the...DUH DUH DUH...putting it all away. You try different methods. Sorting first and then putting away. Not sorting in the interest of time. Folding and immediately putting items away because you know if you set that article of clothing down anywhere other than where it’s supposed to be, it goes to laundry purgatory. None of it helps. None of it is good. But all of it has to be done.

Are you depressed yet? You should be, as laundry is quite possibly The Worst. And that’s why, if you live in Atlanta or Charlotte, you need (yes, need) this deal for $20 off your first 2ULaundry order. It includes free pickup and drop-off and the laundry is delivered right to your door - like magic, only it’s not. It’s 2ULaundry. Go HERE to find out how it works!