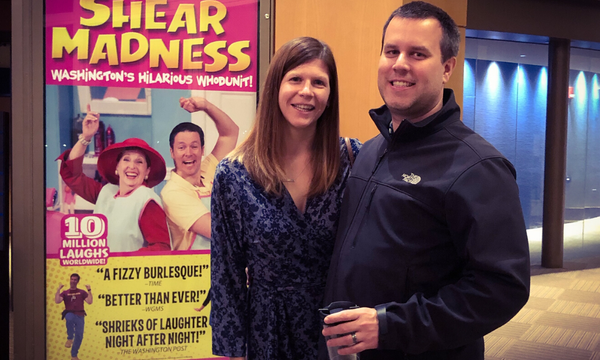 Shear Madness is the comedy whodunit that lets the audience solve the crime! Set in present-day Georgetown, Shear Madness engages armchair detectives to help solve the scissor-stabbing murder of a famed concert pianist who lives above the Shear Madness unisex hair styling salon. Seen by over 11 million people worldwide, the mixture of improv humor and audience sleuthing keeps every audience in stitches as they try to outwit the suspects and catch the killer!

We sent one of our MOM Squad ambassadors and her husband to experience Shear Madness at the Kennedy Center in Washington, D.C. They received free admission in exchange for providing an honest review of their experience.

Save 50% off admission to Shear Madness at the Kennedy Center with this CertifiKID deal. 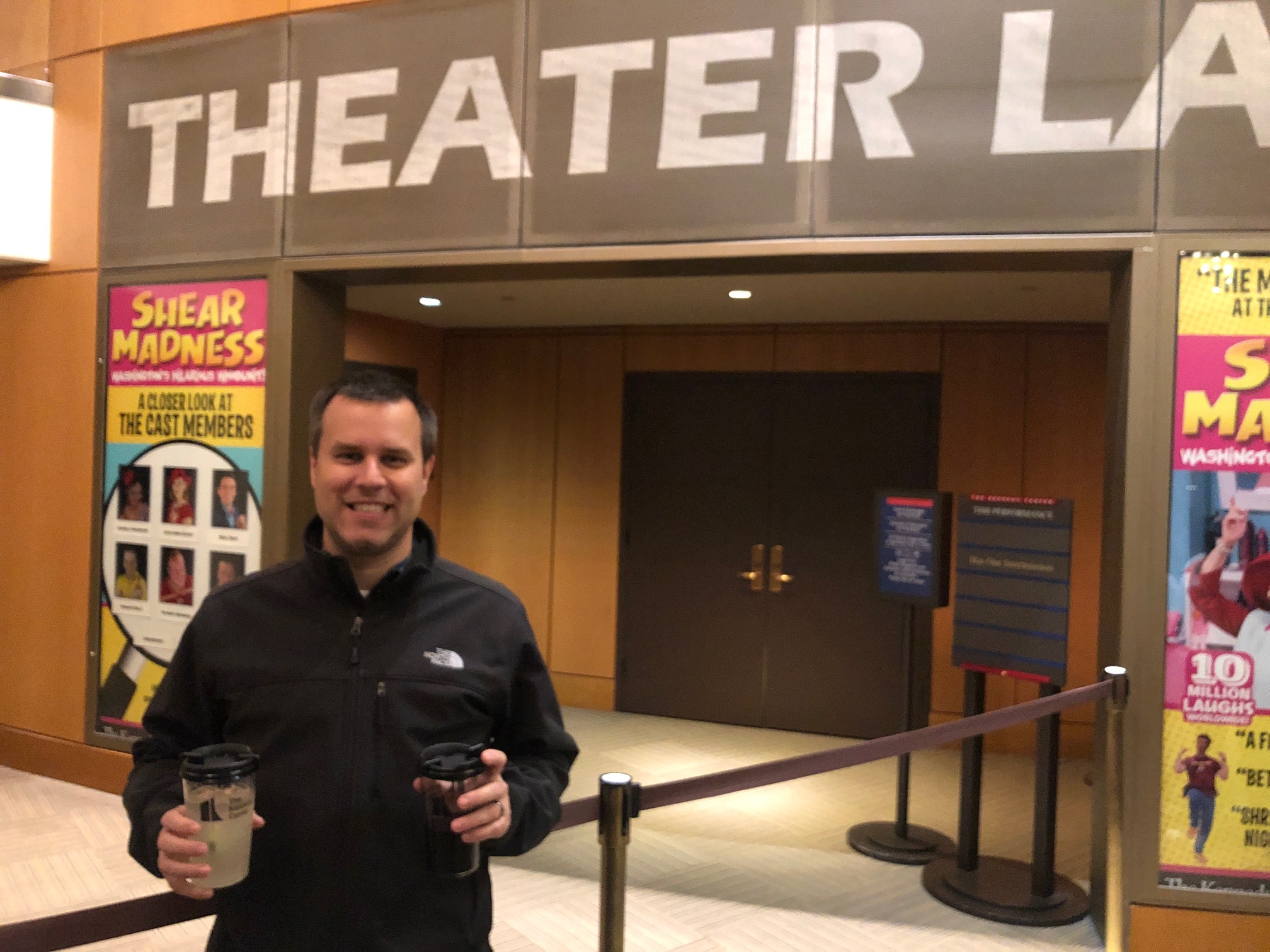 Lindsay: Shear Madness was very entertaining with a lot of pop culture/current event improv thrown in throughout that helped keep the story very up to date. The theater is pretty small and there is a fair amount of audience participation as we tried to solve the murder, so that made it very fun and unpredictable. Because of these unique aspects of the show, you are almost guaranteed to not see the same exact show even if you came a few months later.

In addition to going to see Shear Madness, we decided to eat dinner at the KC Cafe. There were a lot of options, as some sandwiches and sushi were pre-packaged in the refrigerated section, but they also had a soup and salad bar and a hot bar with a variety of different choices of burgers (beef/salmon/veggie). 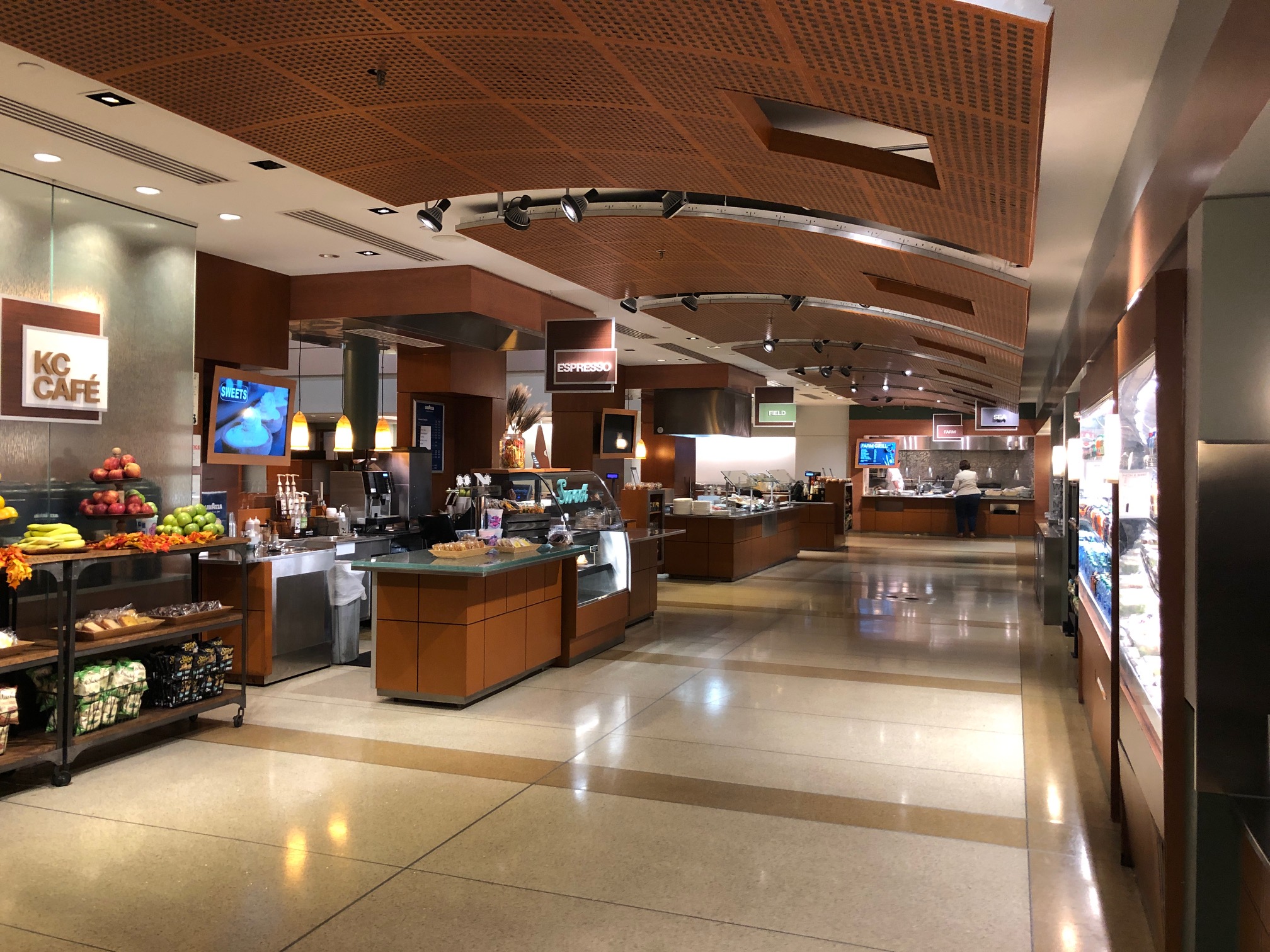 There were also a lot of desserts and snacks as well as a beverage selection that included beer and wine. It was nice to have this cafeteria style meal since we had hit extra traffic driving into the city and now we didn't need to feel like our meal was rushed. 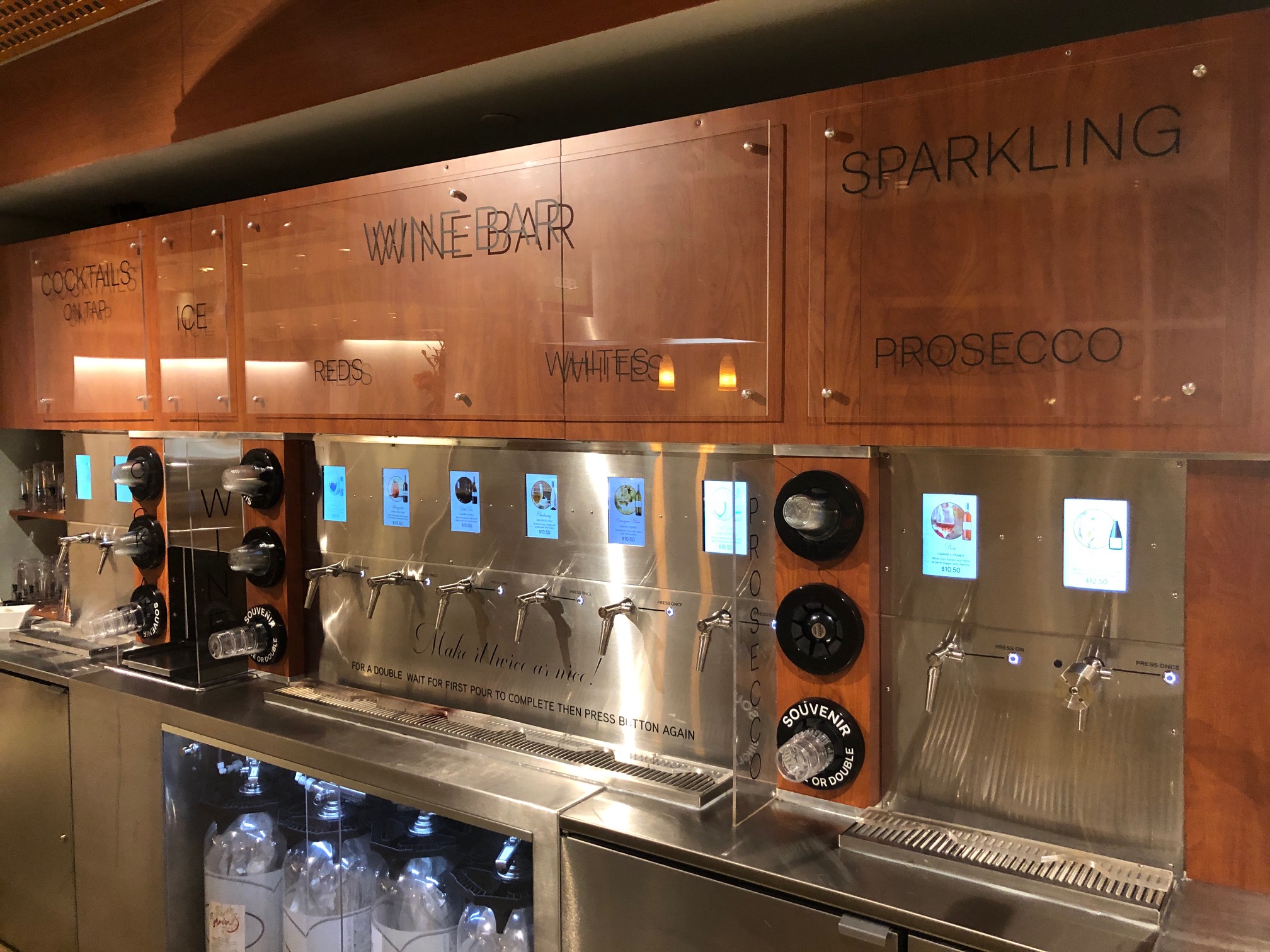 It also gave us a chance to not only walk around the inside of the building, but to also view the District at night while strolling along the large balcony that goes the entire way around the building. 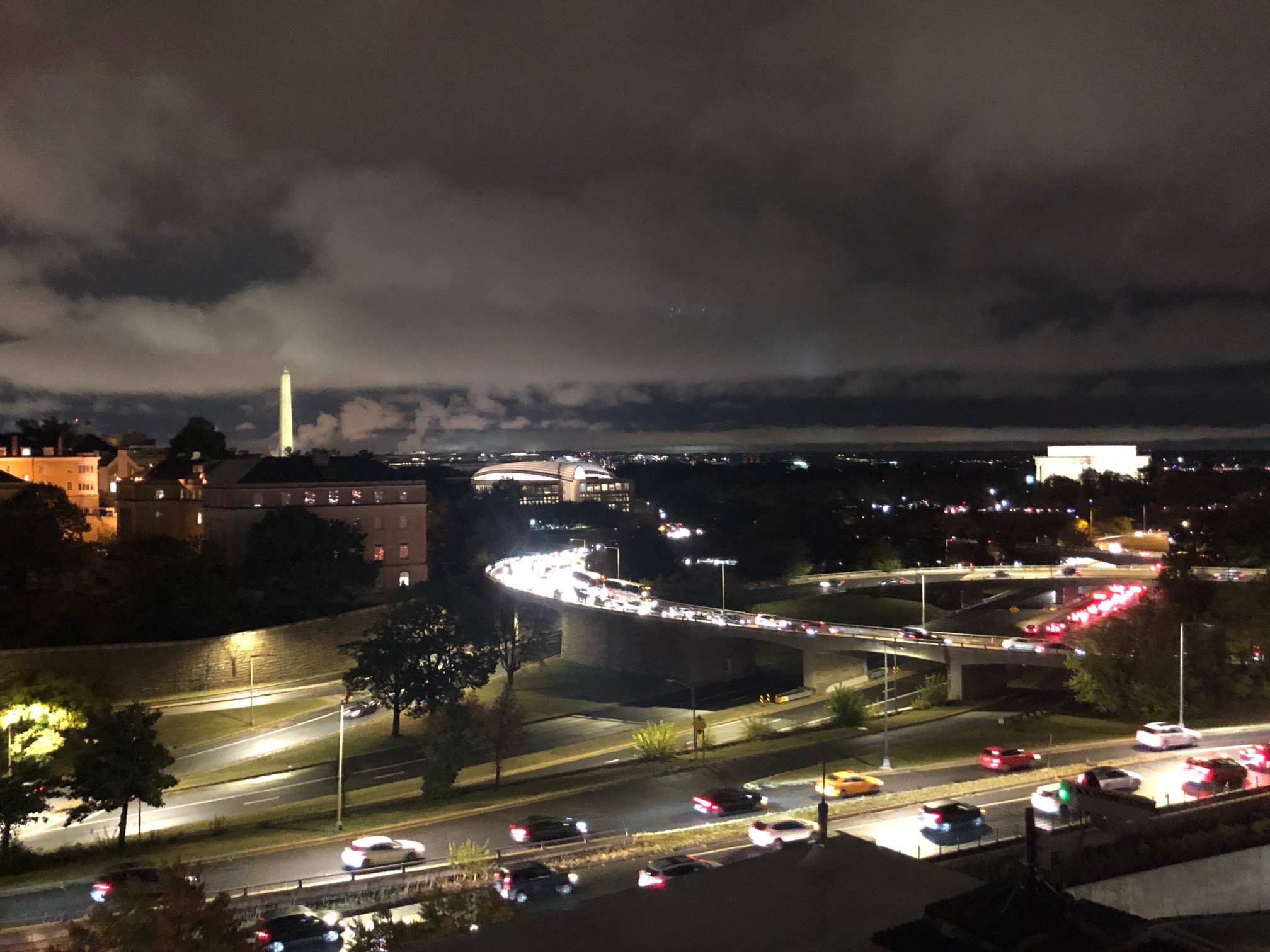 Thankfully, The Kennedy Center is not difficult for us to get to but, depending on the time of the show and when you are coming from, there can be a fair amount of traffic. There is a large garage under the Kennedy Center that is $23 or $20 if you reserve in advance. There is also paid parking at a garage right across the street. The 80 Metro bus stops at the Kennedy Center and there is a shuttle every 15 minutes from the Foggy Bottom metro rail stop for the majority of each day.

There were no lines to pick up our tickets at the will call window. The Kennedy Center is filled with red jacket individuals that are so helpful to direct you to wherever you need to go in the most efficient manner. The wait to enter the theater was also minimal, as they had the line began moving quickly once they started to scan tickets.

What Did You Enjoy Most?

We really enjoyed the play and the salon shop owner was very quick-witted and really stole the show with his improv skills. It's always fun to visit The Kennedy Center and this light-hearted play made for an entertaining Tuesday night.

When we went, there were students from four different schools in attendance. I later read an article that seemed to indicate that Shear Madness is a favorite stop for students visiting Washington, D.C. In some ways, my husband and I felt that they catered a bit to the younger crowd and that it would be a great 'whodunit' play to take his high school aged cousins to.

I do think that being aware ahead of time that you might be attending the show with a majority of students is helpful as you may not necessarily think that this would be a show for a younger audience.

The show is about 2 hours including intermission, but I would definitely add another hour or so to walk around, especially now that the Reach is open.

My children are two and five, so we attended Shear Madness for a date night. I think that kids in eighth grade and above would enjoy the show.

There are so many great things to do in the City, but grabbing a dessert or drink and sitting on The Kennedy Center balcony is a great way to end an evening. 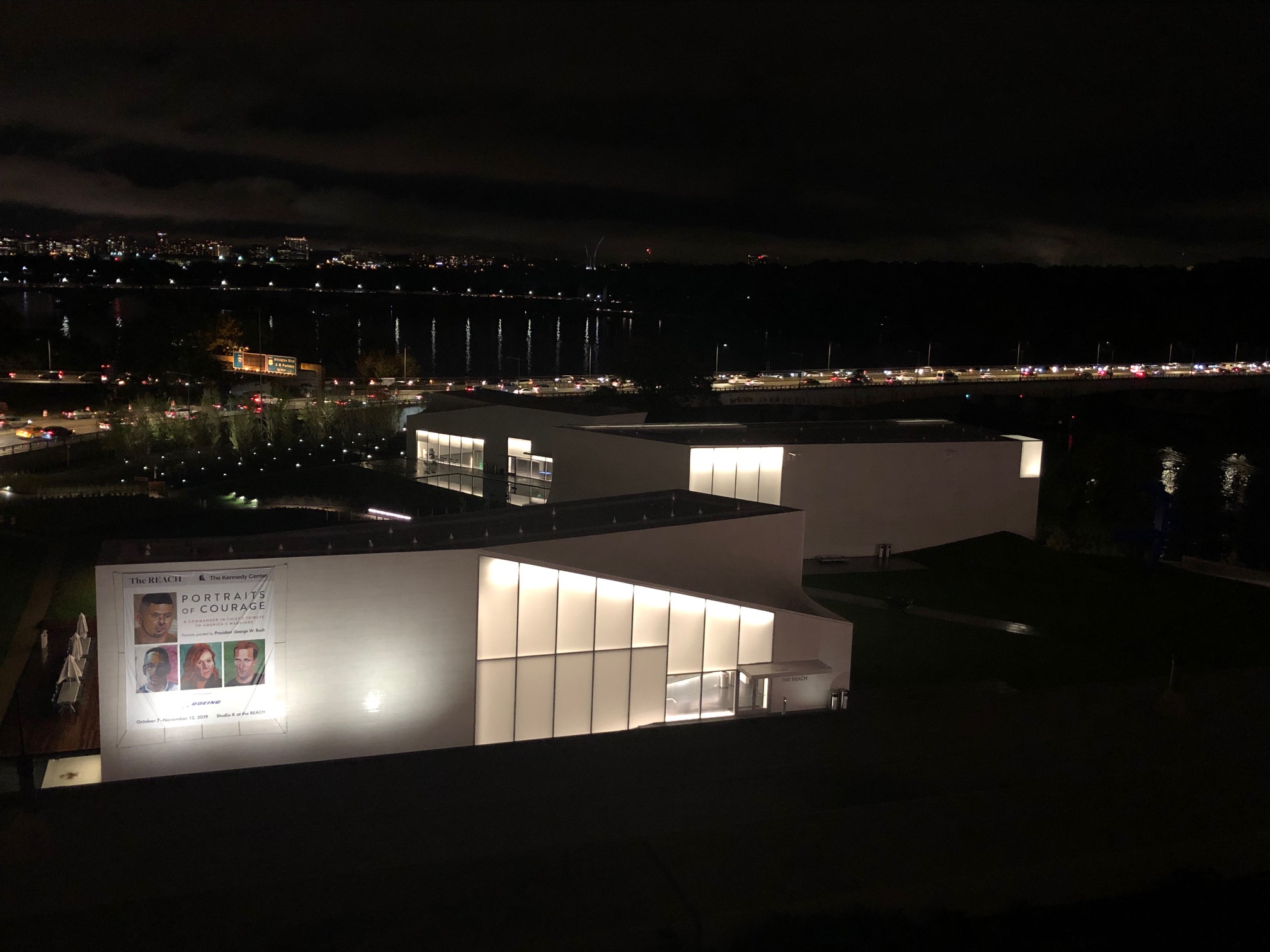 Yes, we think this would be a great show to take some out of town guests.

Do you want the chance to provide your real parent review of one of our deals? Join our MOM Squad Facebook Group (You must be a CertifiKID member to be approved for membership. Not a member? Sign up HERE.).