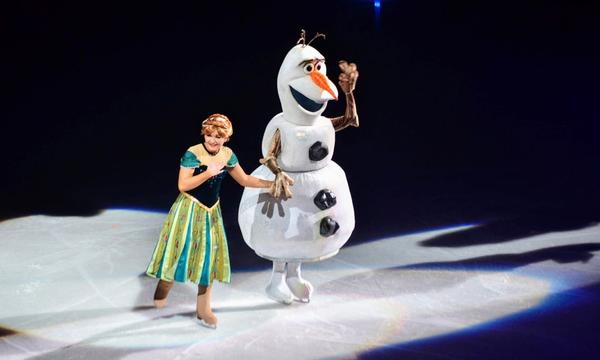 Disney on Ice is a touring show that brings to life your favorite Disney characters and stories in a spectacular ice skating production.

We sent two of our parent ambassadors to experience Disney on Ice's Celebrate Memories show at Capital One Arena in Washington, D.C. They received free tickets in exchange for providing an honest review of their experience. 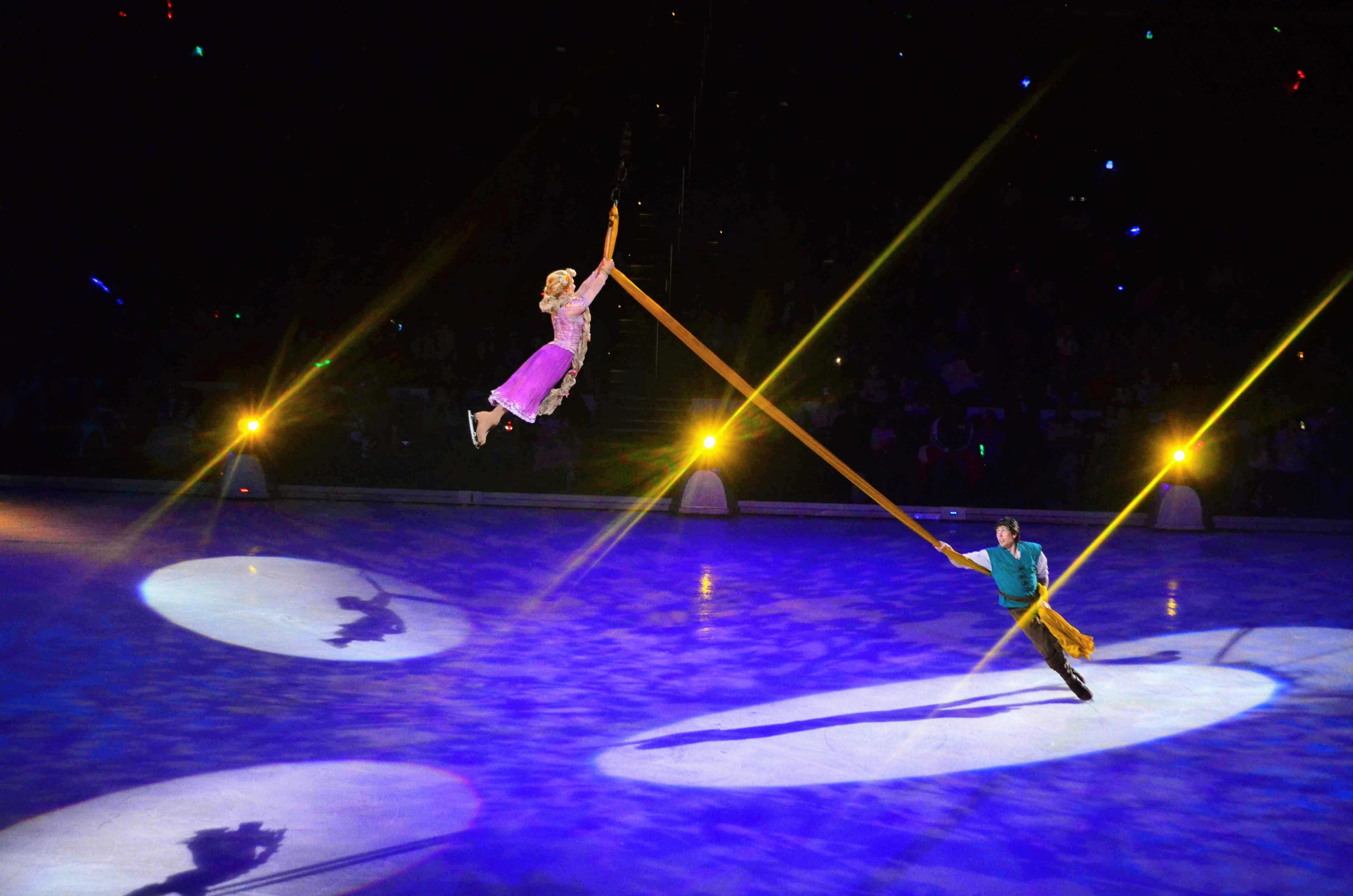 Josh: When heading in, there are Disney vendor tables selling gizmos and gadgets a plenty. Most of them light up so the arena glows with magic wands and Maui‘s hooks when the lights go down. 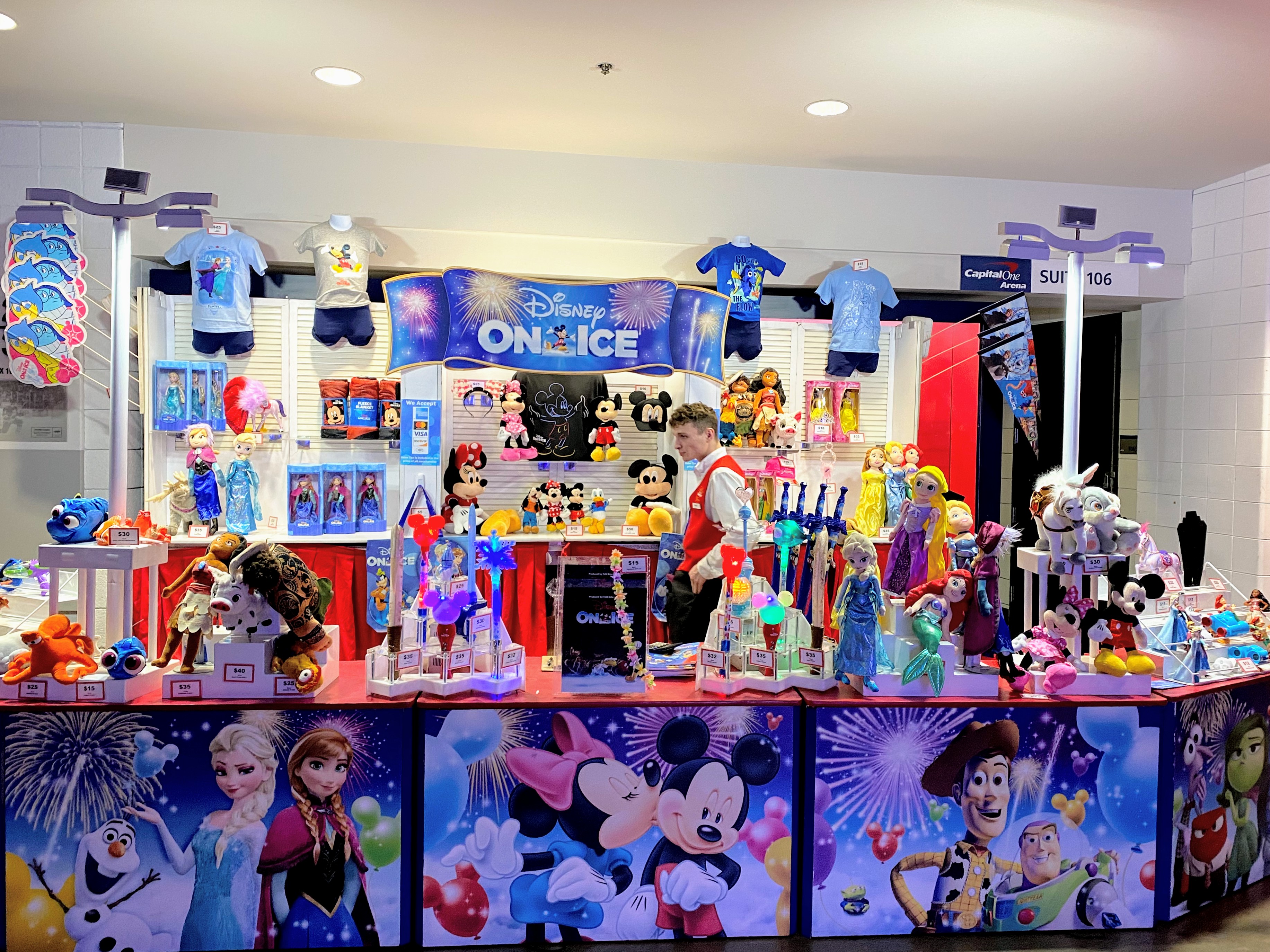 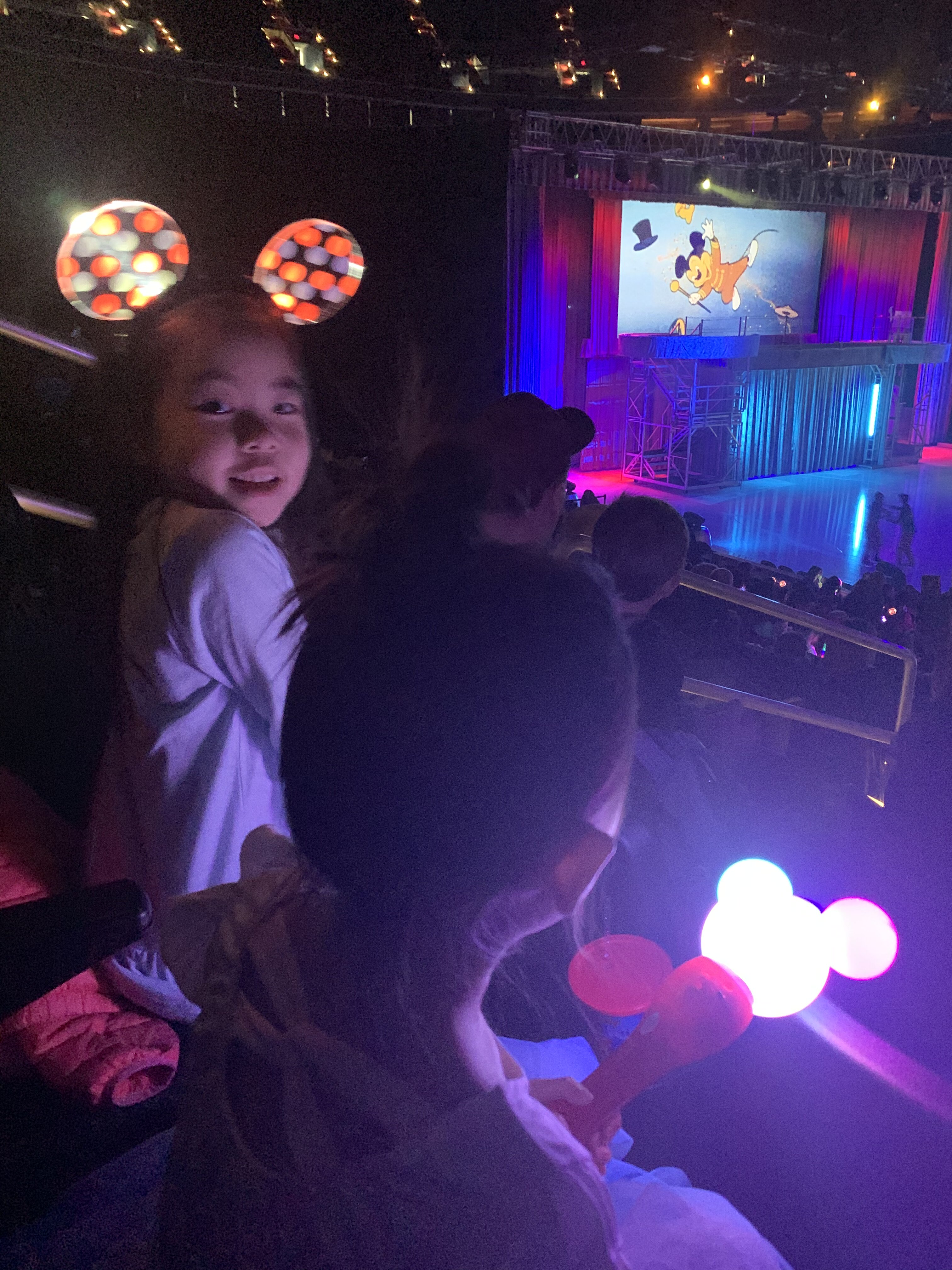 Josh: Before the show started, there is a slideshow on a big screen showing social media posts of the hashtag, #disneyonice. If you take a family photo, post it on Instagram or Twitter, and set your location at the arena before the show starts they may show your photo on the big screen. We did this and our photo made it in the slideshow for the intermission. 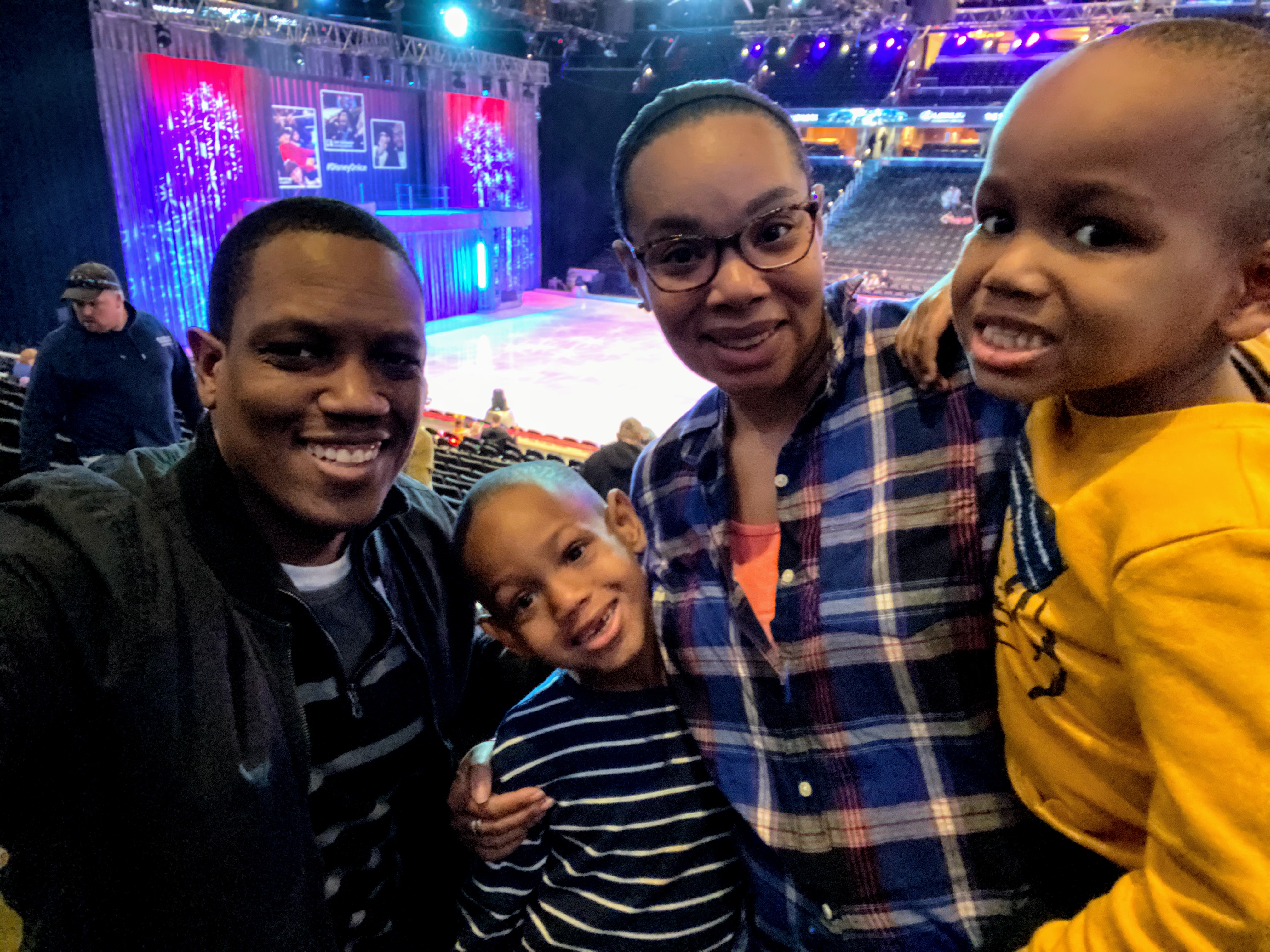 Kim: Disney on Ice: Celebrate Memories was an amazing show that entertained from start to finish and had a little bit of everything for all ages. The show starts with Minnie and Mickey flashing back to their favorite memories with the other classic characters, Goofy and Donald. 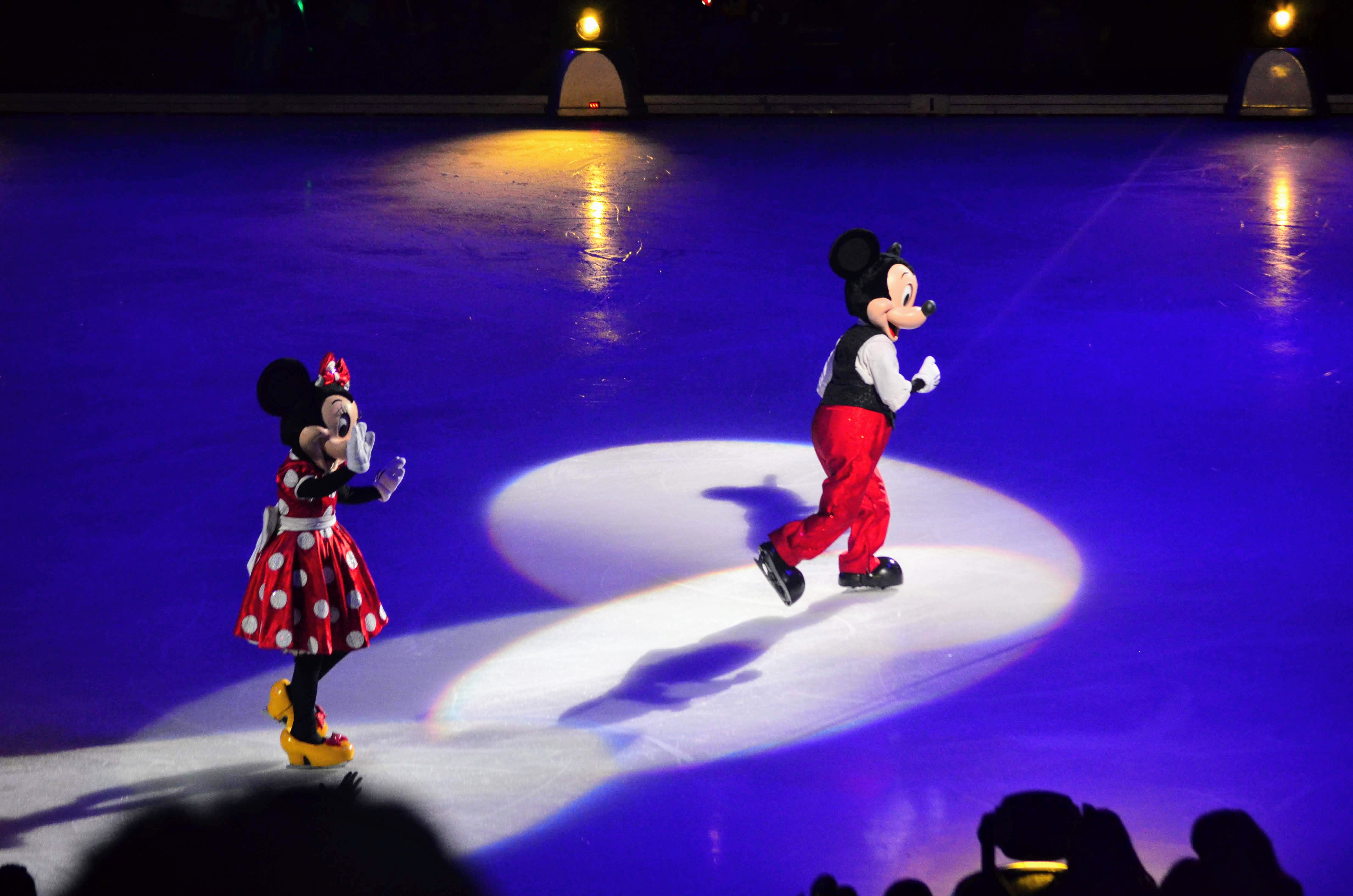 Josh: Once the show started, the ice skating characters came out in rapid succession! Starting with Mickey and the clubhouse gang and through dozens of beloved Disney characters. 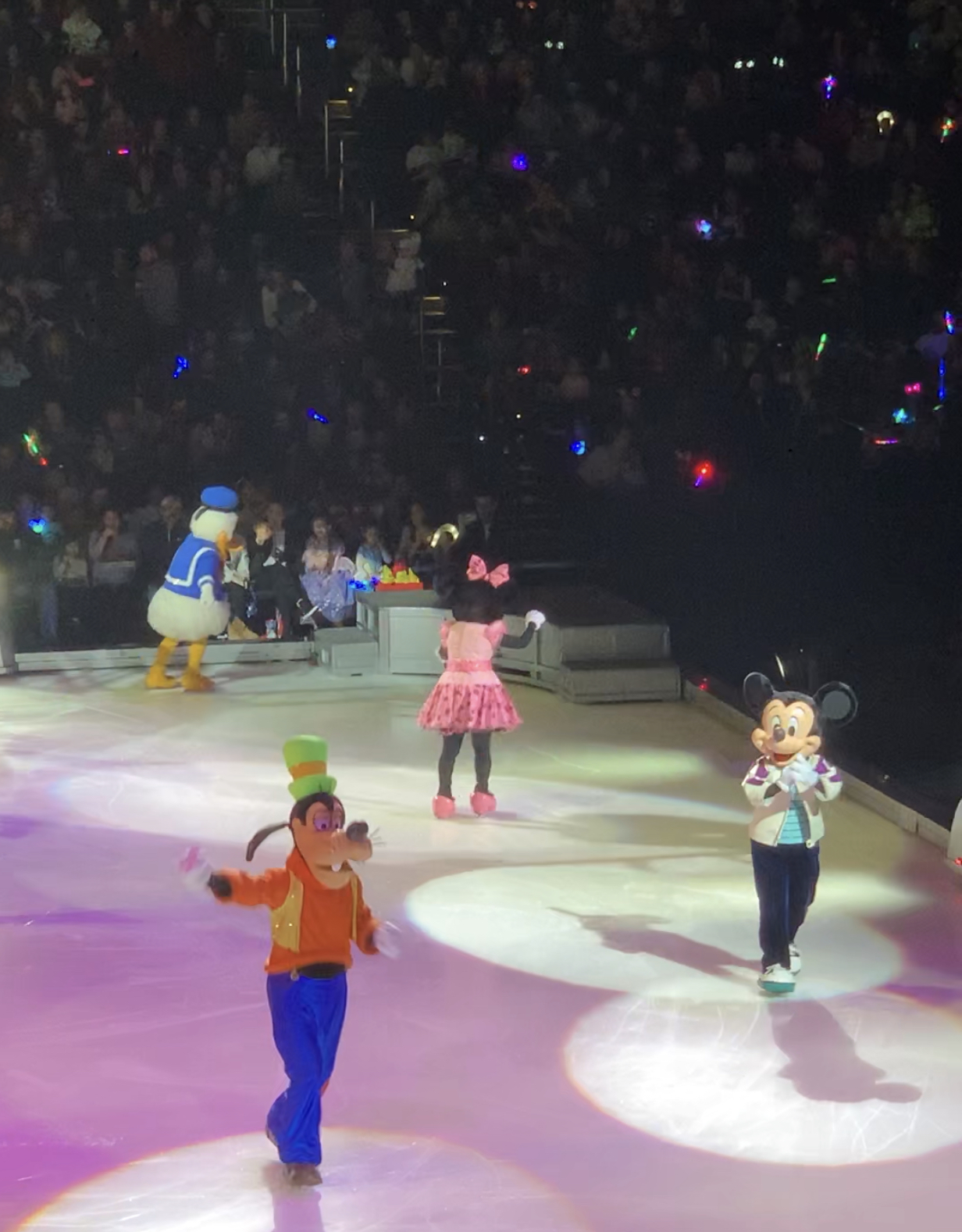 Kim: In the first half there were performances from the characters from Toy Story, Inside Out, Finding Dory and a medley that highlighted the Disney Princesses. 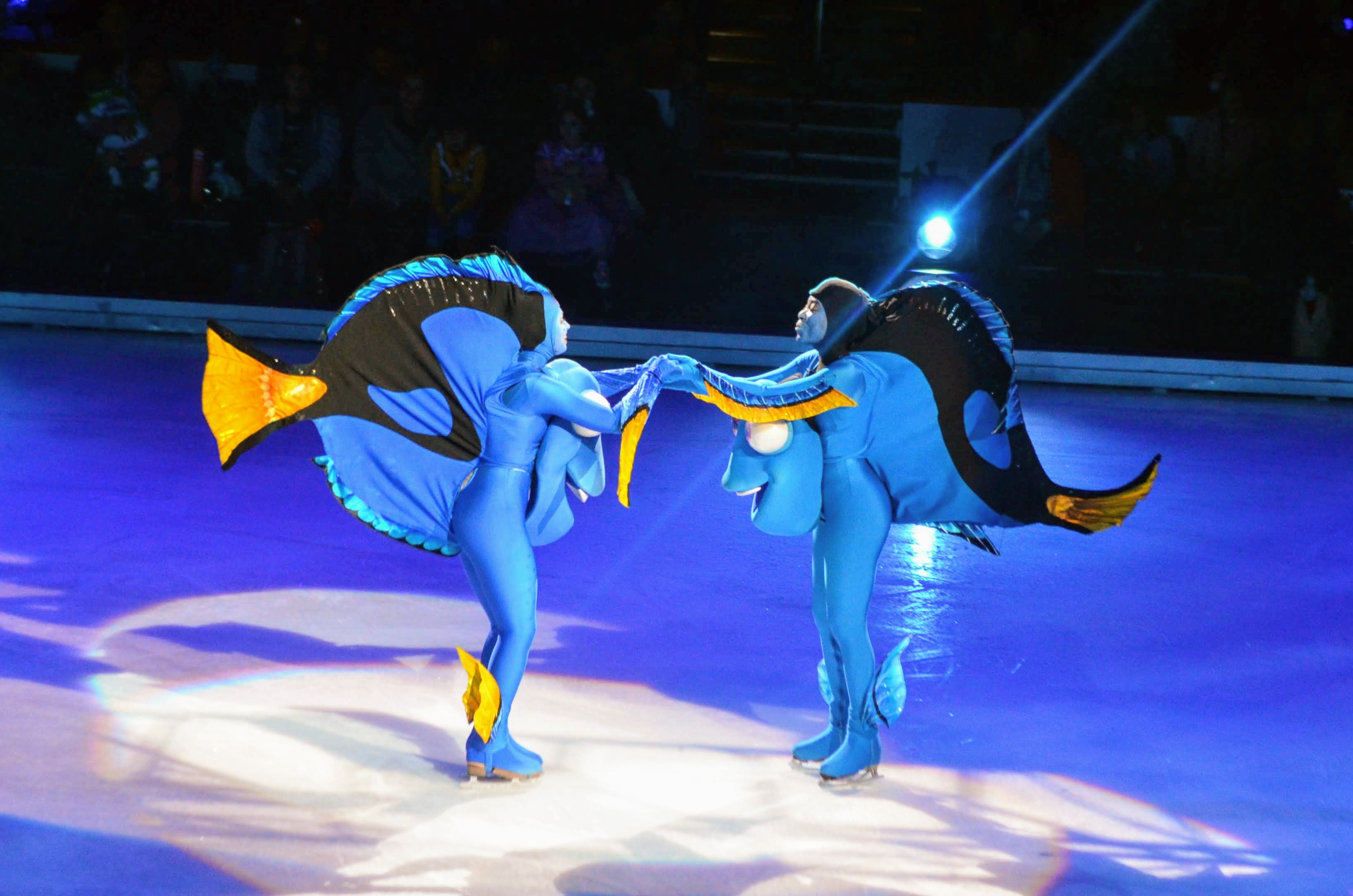 Kim: Tiana, Cinderella, Mulan, Jasmine, Ariel, and Rapunzel each had their own special performance. 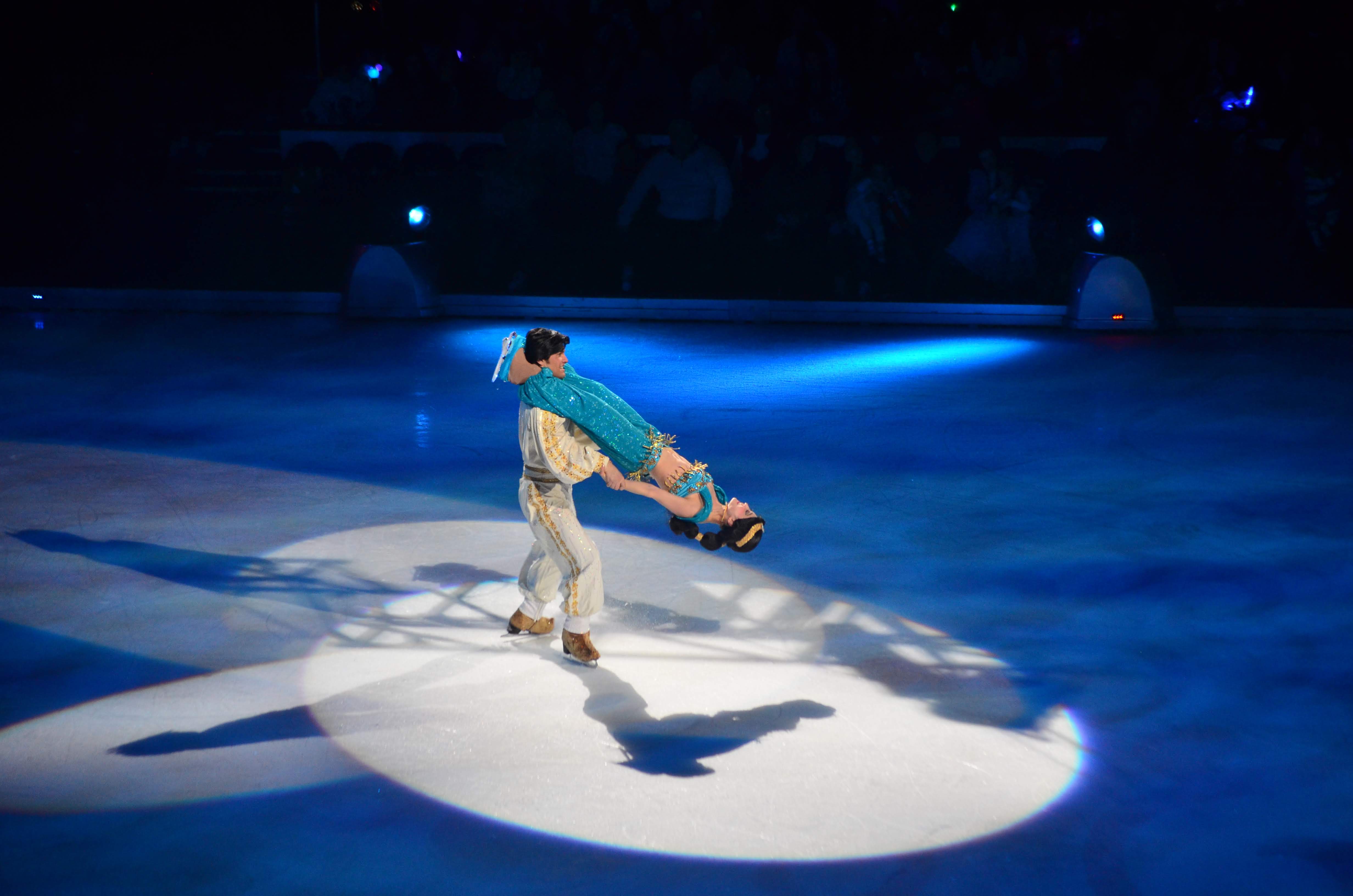 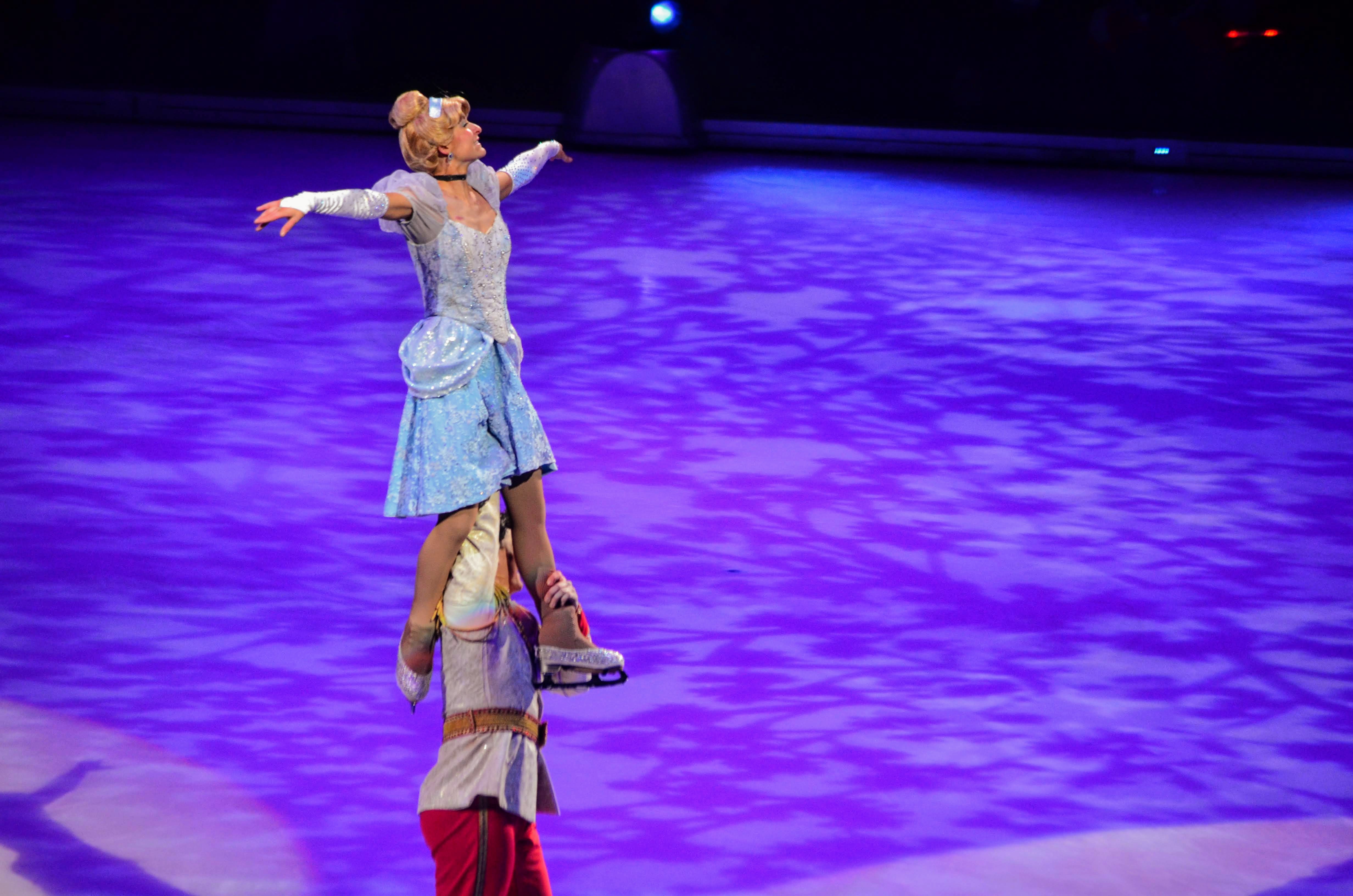 Kim: Ariel and Rapunzel both did amazing aerial tricks and then they all came back together at the end of their part.

Josh: From my count there were 13 Disney Princesses and at least 15 movies represented. 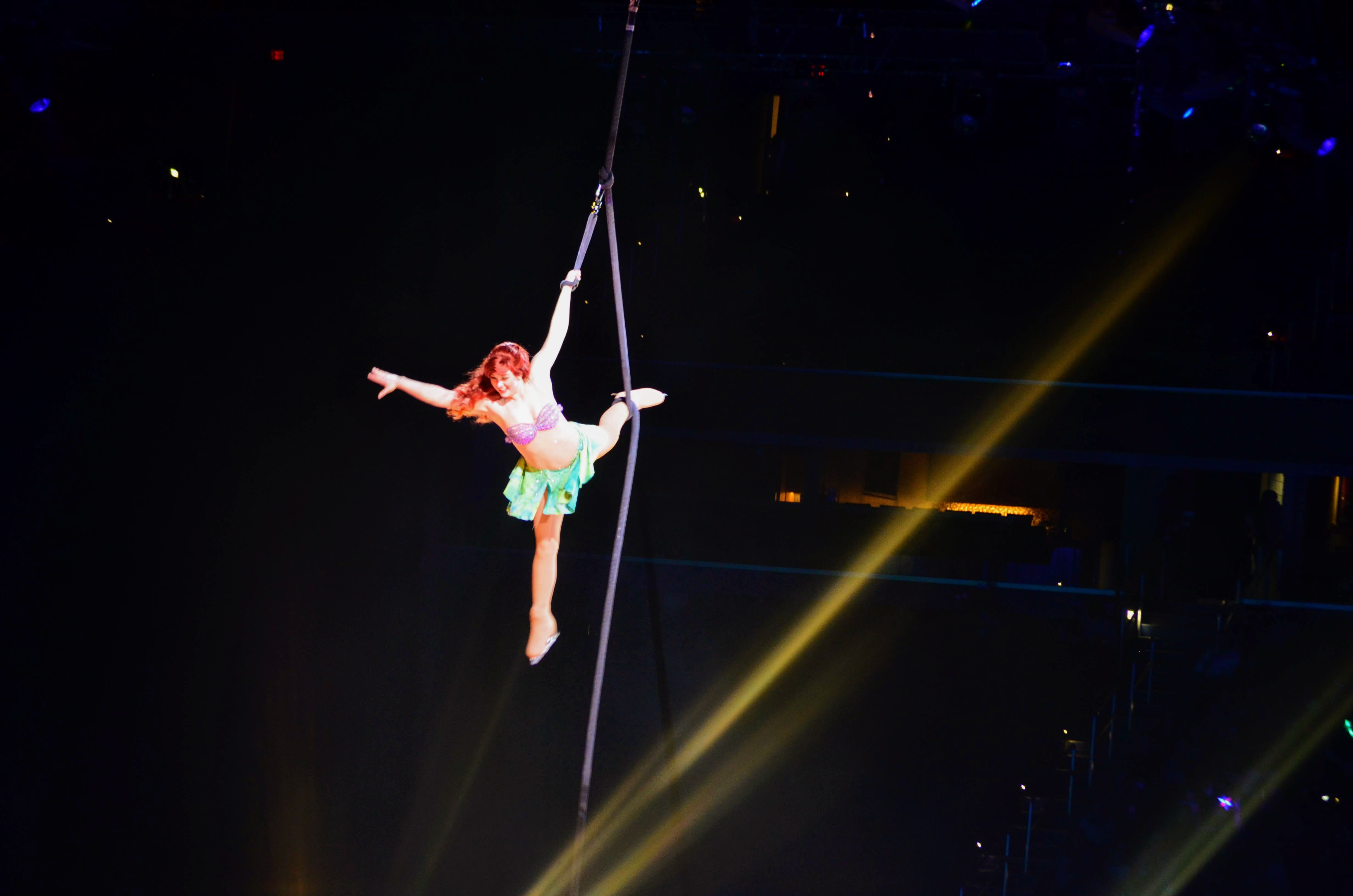 Josh: About 45 minutes in there was an intermission. It was timely, especially for little kids that needed to move around or take bathroom breaks.

Kim: The second half started with a rendition of Mickey and the magic brooms scene from Fantasia and then an abbreviated version of Frozen. I had seen this before but it is always a favorite of the kids, especially with the new Frozen 2 recently released. 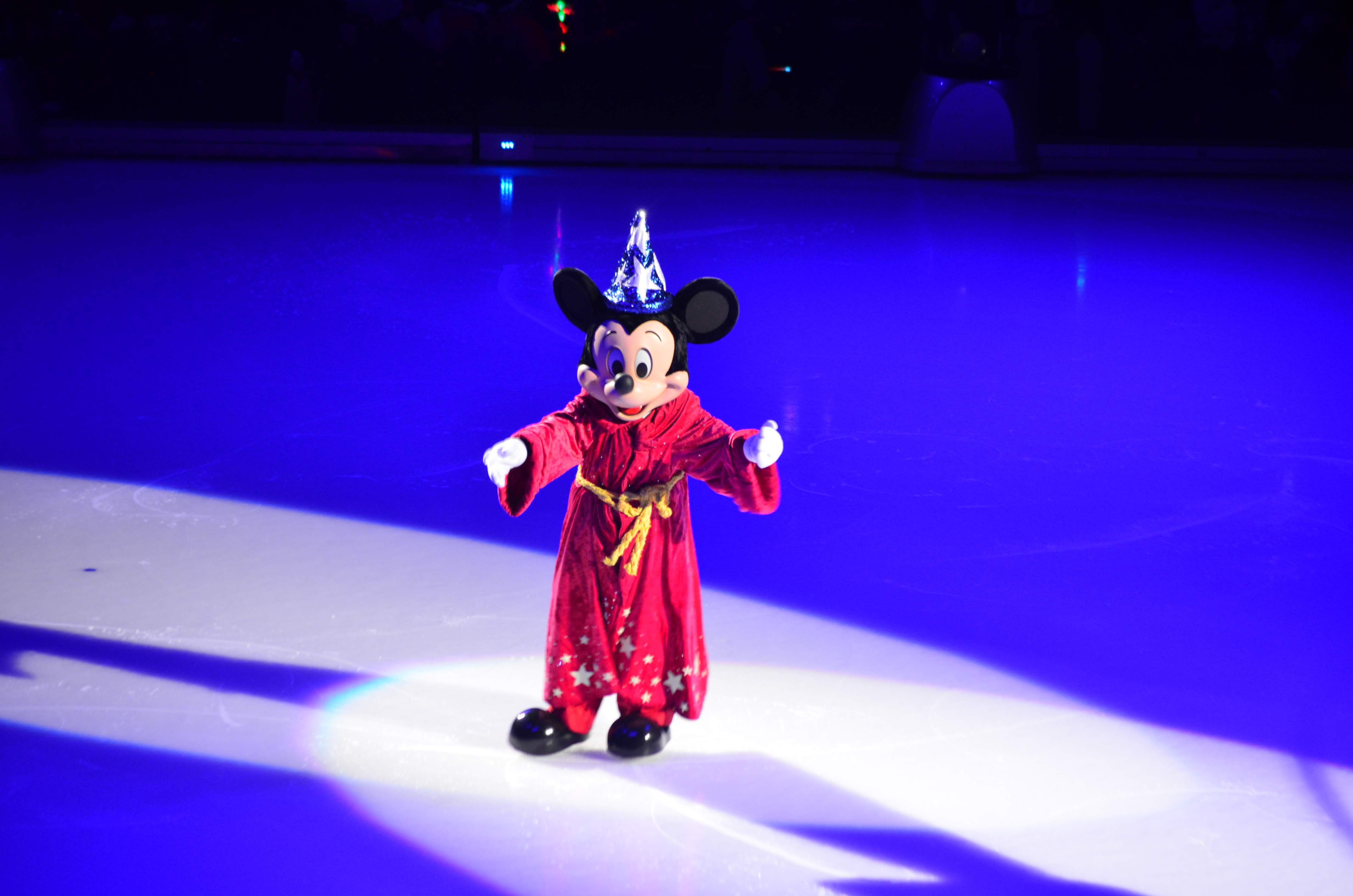 Kim: This was followed by a mini version of Moana and incorporated the video screen, pyrotechnics, and storytelling. That was the first time I've seen the screen used and the choreography and pyro was synchronized to the video. It was visually stunning and made me feel like I was in the movie.

Josh: Each movie had its own short routine and they didn’t bore you with similar acts. Toy Story did an interactive rodeo style dance lesson, Moana glided across the ice on a boat, Rapunzel did acrobatic stunts on a blond cloth that resembled her magical locks, and it just didn’t end. 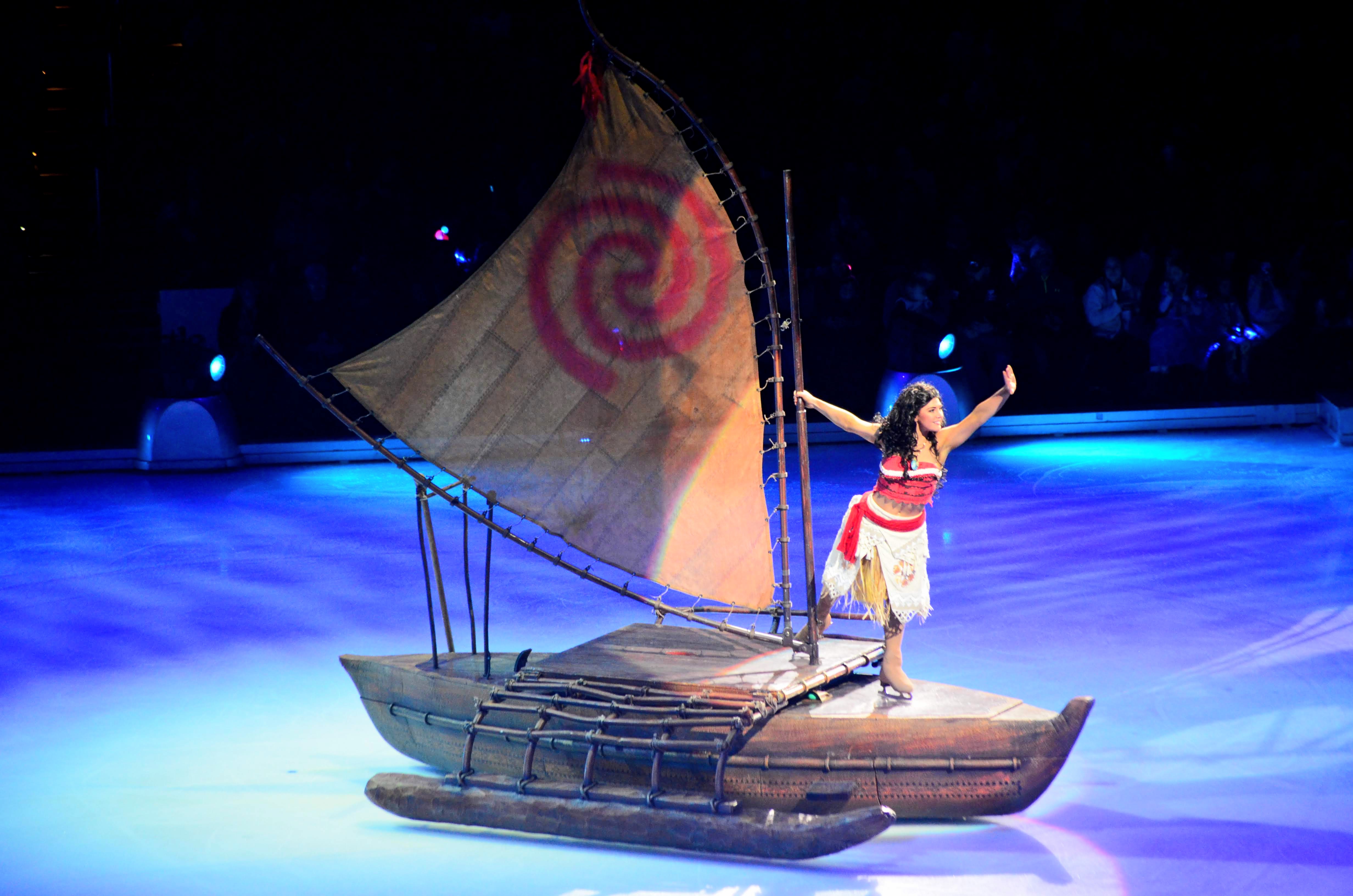 Kim: All of the characters from the beginning of the show came out for the finale. 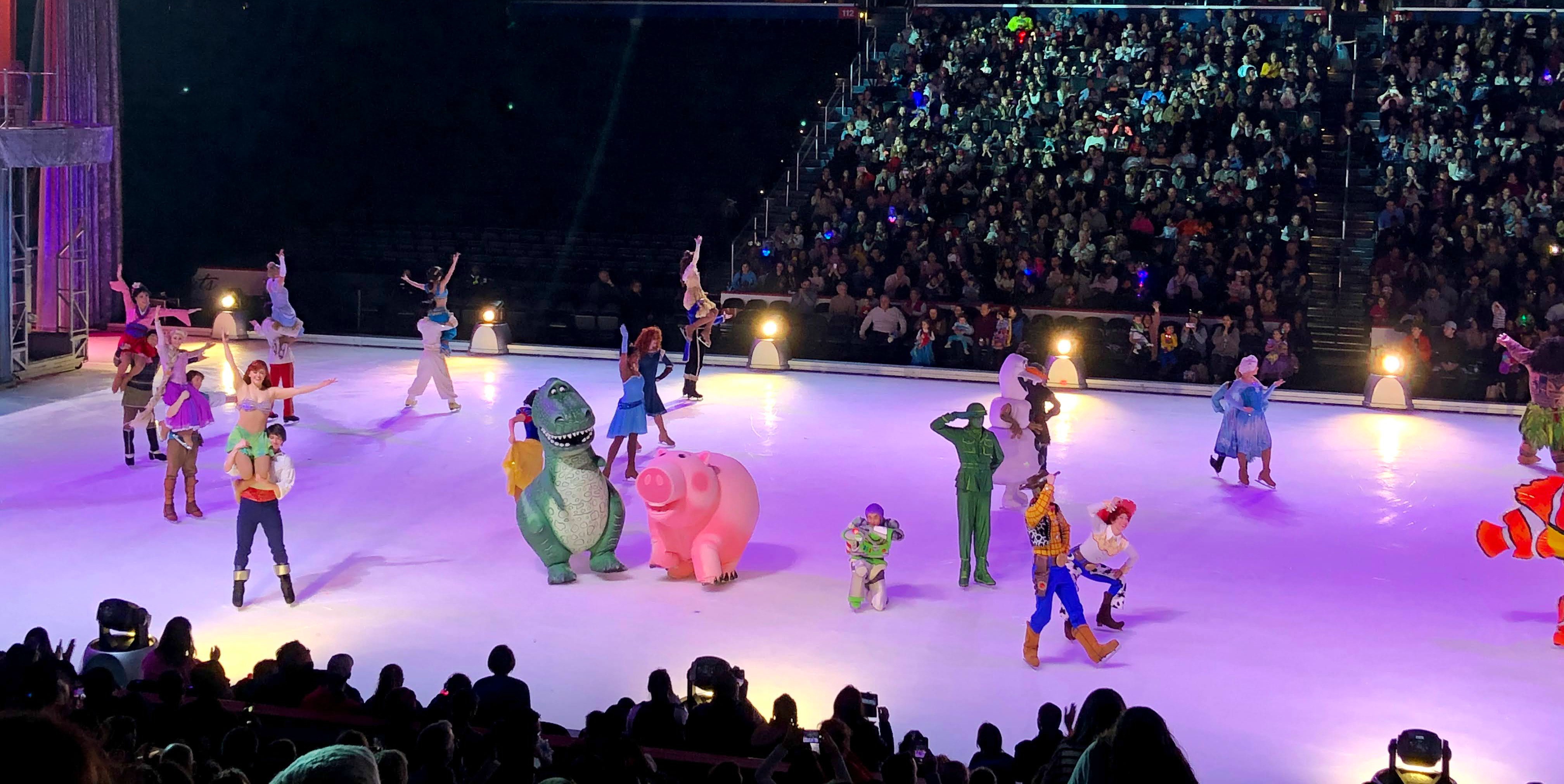 Kim: This was the third Disney on Ice show that my family has seen, and this show was definitely the best one. The characters and stories were all more current than past Disney on Ice shows so my girls were familiar with everyone they saw and they loved it. I also liked that they incorporated more crowd interaction and video. The show was fast paced, which was great for younger kids who may have a shorter attention span. It was a great show! 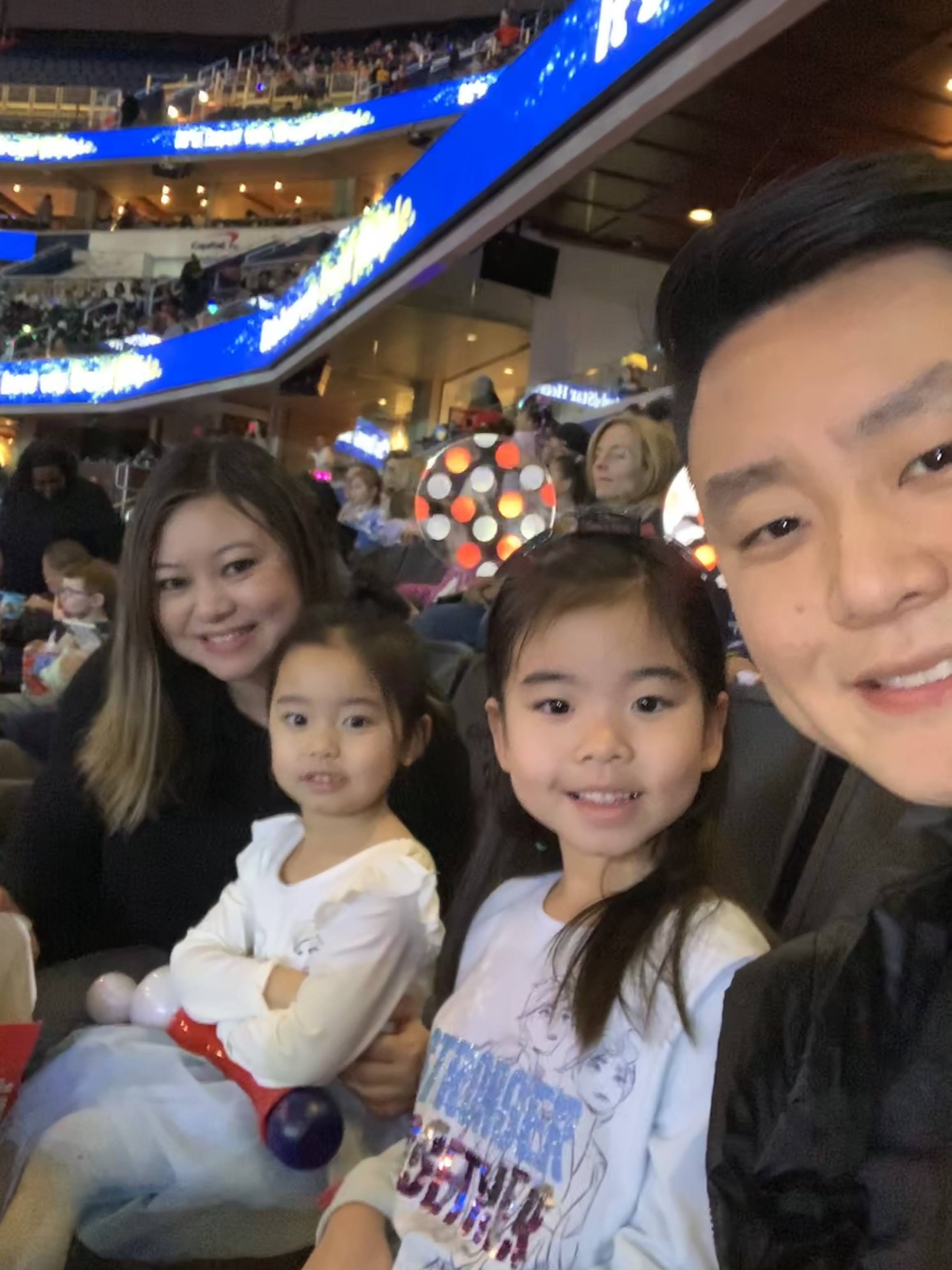 Josh: The Capital One Arena is easy to find. It's located in DC's Chinatown. If the name doesn't sound familiar, it used to be called the Verizon Center and is the home of the Washington Capitals and the Washington Wizards. Garage parking is the only sure thing and can be $30-35 to park in the area's garage or the Gallery Place, which is attached. There is street parking but it is very limited and most spots have a two-hour limit. The venue sits over the Chinatown metro station. On a rainy day you can actually ride the train and not have to go outside at all.

Entry was very quick. There were security tables at every door. They check all bags and ask everyone to unzip their jackets/coats. There was confusion about "professional cameras". I was told that the day prior they wouldn't let DSLRs in, but since changed their stance. It's probably best to contact the production company or box office ahead of time if you plan on bringing a noticeable amount of camera gear.

We did not have a stroller, but there were a handful of families with them. I'm sure security checked those as well. There are designated stroller parking areas, ask the staff for the closest one when you arrive. The walking traffic when leaving was very crowded, so keep that in mind when deciding on a stroller. 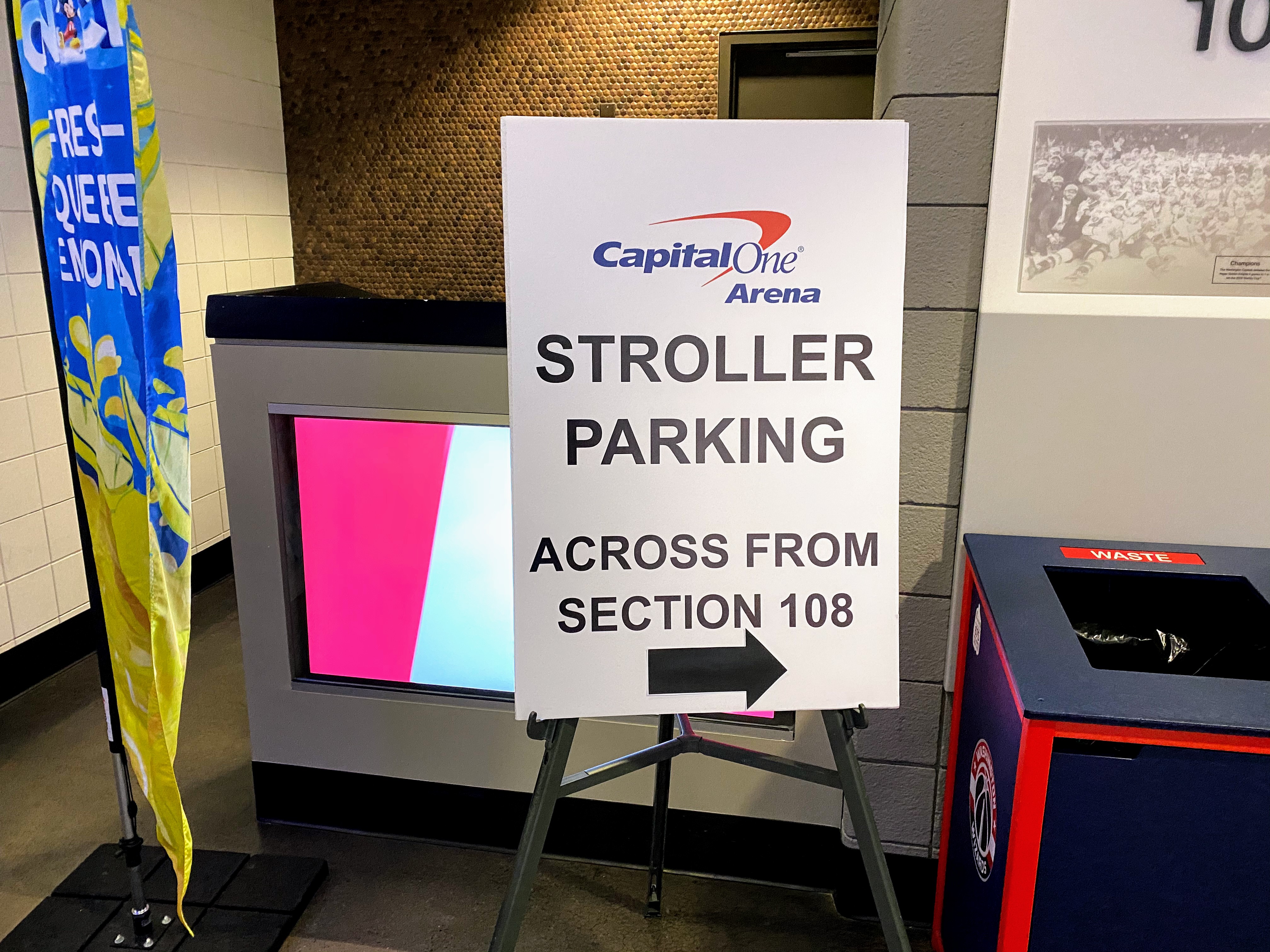 Kim: Capital One Arena is located in DC's Chinatown and is very easy to find. We went on a Sunday so street parking was free. However, we knew the area would be crowded and street parking would be limited. We didn't want to drive around looking for parking so we choose to park in a parking garage across from the Arena. We used an app called Parkwhiz to reserve a spot ahead of time. Parkwhiz helps you to find a parking space in garages and you are able to choose the location and price you want to pay. The Arena is conveniently located above Gallery Place Metro Station.

We arrived an hour before the show was scheduled to start so there wasn't much of a line. When you enter the arena there are multiple security check points where you enter through a metal detector and they check your bags so the line went very fast. After you pass security you go into the ticket line. There are multiple ticket lines so this process was very fast as well.

What Did You Enjoy Most?

Josh: They covered so many different popular characters. There was something for everyone. The acrobatics, show props and pyrotechnics were so good that you forget that they’re ice skating. It’s truly good entertainment.

Kim: The costumes, music, special effects, storytelling, and ice skating were spectacular and beautifully executed. Disney on Ice raised the bar for this show and we all enjoyed it!

Is There Anything That Could be Improved?

Josh: Exiting was a madhouse, but with this size of an arena there isn’t much you can do about this. If you have a stroller it may be easier to sit tight for ten minutes and let it clear out a bit.

Kim: No, my whole family loved every minute!

Josh: My kids are 5 and 6 (almost 7). They really enjoyed it and stayed attentive the whole time. I wonder if they would’ve gotten restless if they were younger. I would recommend ages 3+ for the whole show. Any younger, I would plan to exit during the intermission only if you need to. For older kids, it depends on their interests. The entertainment value is there. Plenty of parents around me were also wowed by the high quality performances and stunts.

Kim: My girls are 4 and 6 but I recommend this show for all ages. 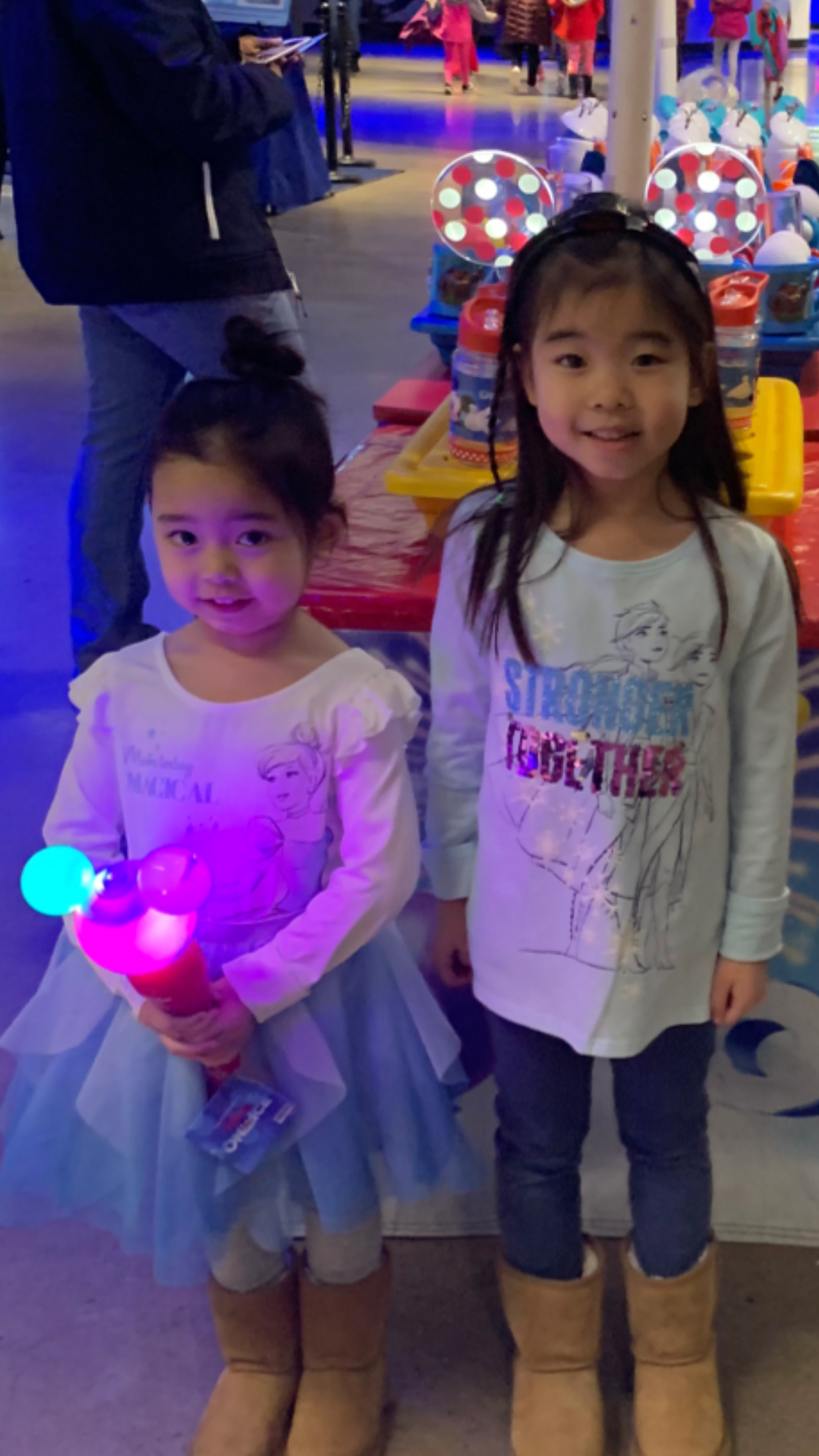 Josh: It’s a two-hour show including an intermission.

Kim: I recommend coming an hour early so you don't have to rush and can look at all the different items in the shop stands and buy snacks. The show was 2 hours long.

Kim: There are multiple food court options located on each level. If you show that you have a Capital One credit card you can get 10% off. Also, an empty water bottle for water is permitted per person.

Josh: Strollers are allowed in the arena, but not the the seating area. There are designated areas to park strollers.

Kim: Costumes are only allowed for 13 and under. My girls just wore Disney themed clothes so they could be more comfortable. If you don't want to spend the $35 for the Disney gear inside there are street vendors who will sell you light up toys for your kids outside of the Arena for much cheaper.

Josh: With the theme being ice skating, be sure to do some skating of your own at the National Gallery of Art. We walked to the rink a few blocks south (12 minute walk) and the kids got to see how difficult it is to just avoid falling on the ice. 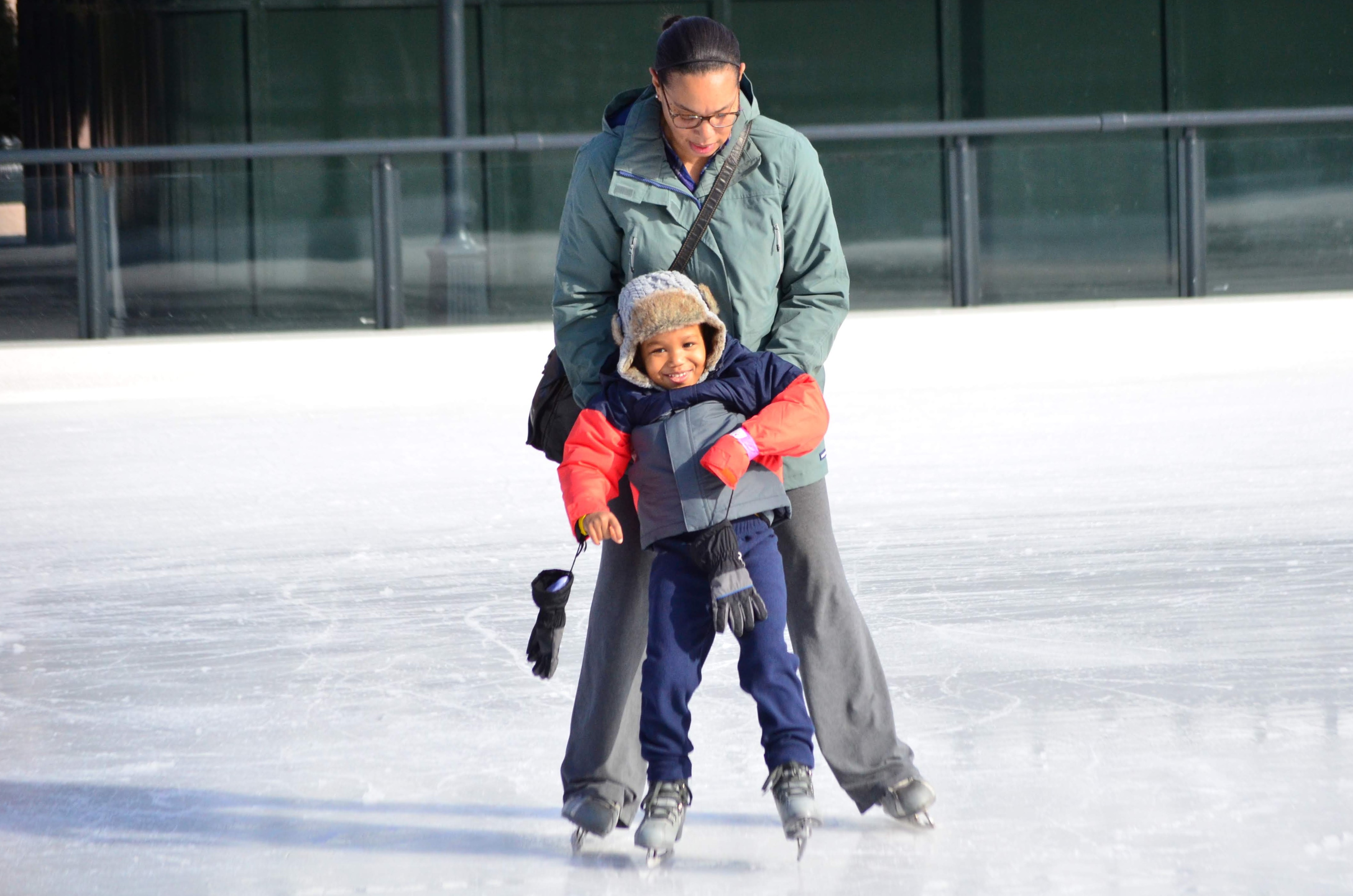 Since the parking garages for events are all day, you can park then enjoy downtown DC for the day. The venue is in the heart of Chinatown, which has a lot of great restaurants. For family-friendly options, check out Wok & Roll or Farmer's & Distillers (outstanding brunch). At the corner of 6th & H street, you can take a photo with the cooked ducks, heads still attached. 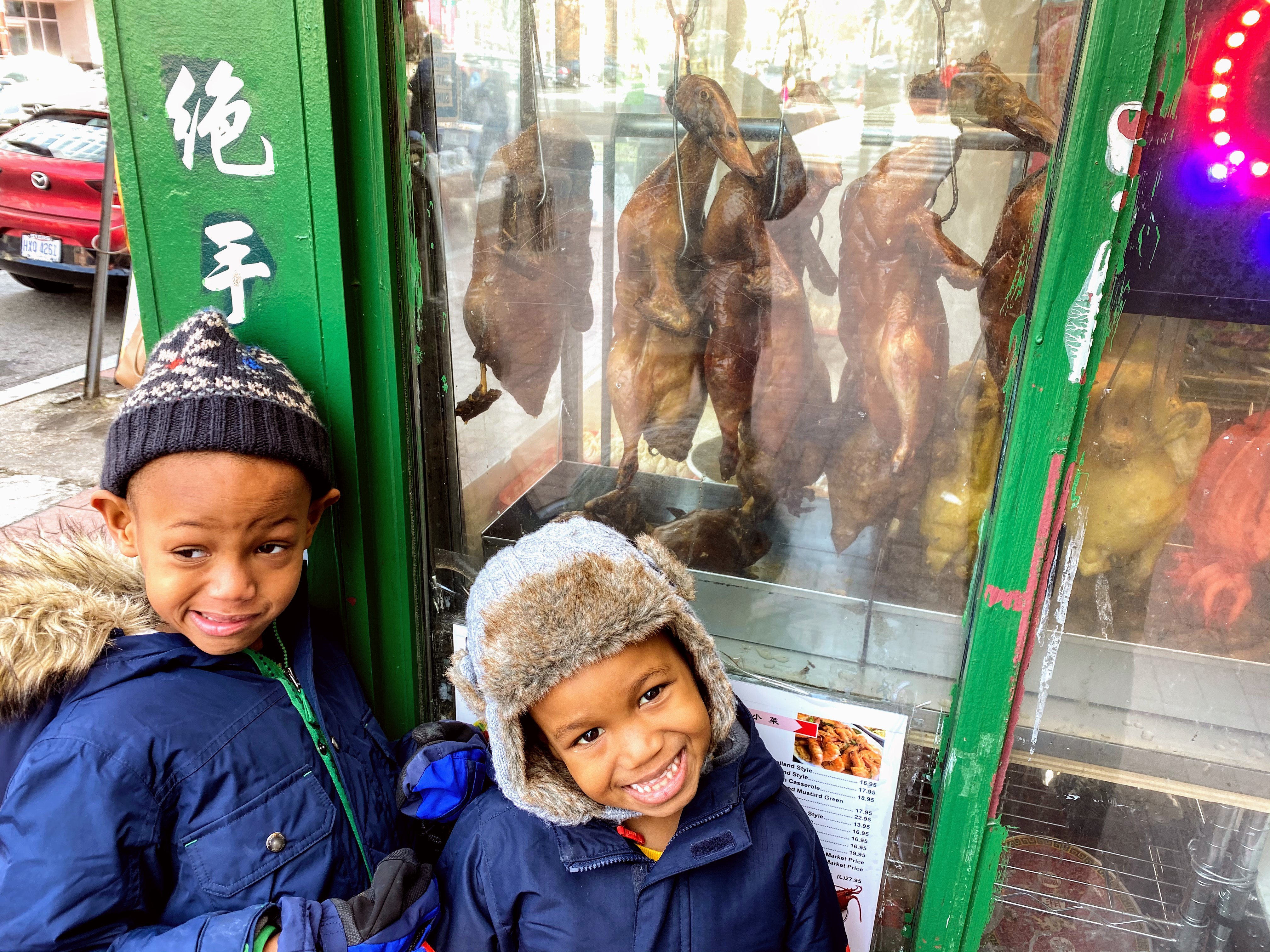 Kim: There are many family-friendly restaurants located next to the Arena if you want to eat after. However, they might be crowded depending on the time the show is over so if you want to guarantee getting in fast make sure to plan ahead to make reservations.

Josh: Absolutely. There seem to be a variety of shows on tour. The production quality impressed the whole family.

Kim: We will definitely make going to Disney on Ice a family tradition for years to come. It's a great option to feel the Disney magic since we live far from Disneyland and Disney World.

Do you want the chance to provide your real parent review of one of our deals? Join our MOM Squad Facebook Group (you must be a CertifiKID member to be approved for membership. Not a member? Sign up HERE.).