An Epic Birthday Ice Cream Crawl: The Scoop on the Best Spots in Northern Virginia 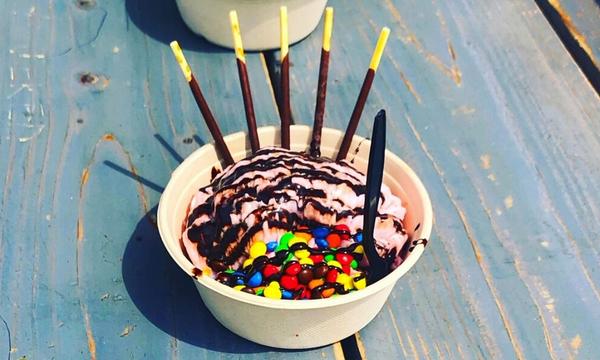 When our third and final kiddo came along, I was thrilled to finally have a summer baby. It's so much more fun to plan a birthday party in July than February, YKWIM?! Over the past decade, we've had pool parties, a backyard luau, a mobile shaved ice truck come to the house, water slides and the list goes on.

But this year, enter covid just in time to crash my daughter Lyla's 11th birthday. Ugh. So I posed the idea of a mom-daughter ice cream crawl = as much ice cream from as many different places as we could shove in our mouths in the space of an afternoon. It didn't take much convincing to sell her on the idea.

While there are plenty of amazing traditional ice cream shops in Northern Virginia (Sugar Mama's in Fairfax, Peterson's in Clifton and Toby's in Arlington are among our faves), we decided to focus our crawl on more unique spots, most of which we hadn't tried before. And while we didn't intend for them all to have an Asian flare, that's just how things (and Google search results) unfolded.

So with empty stomachs and lots of fanfare, off we went! 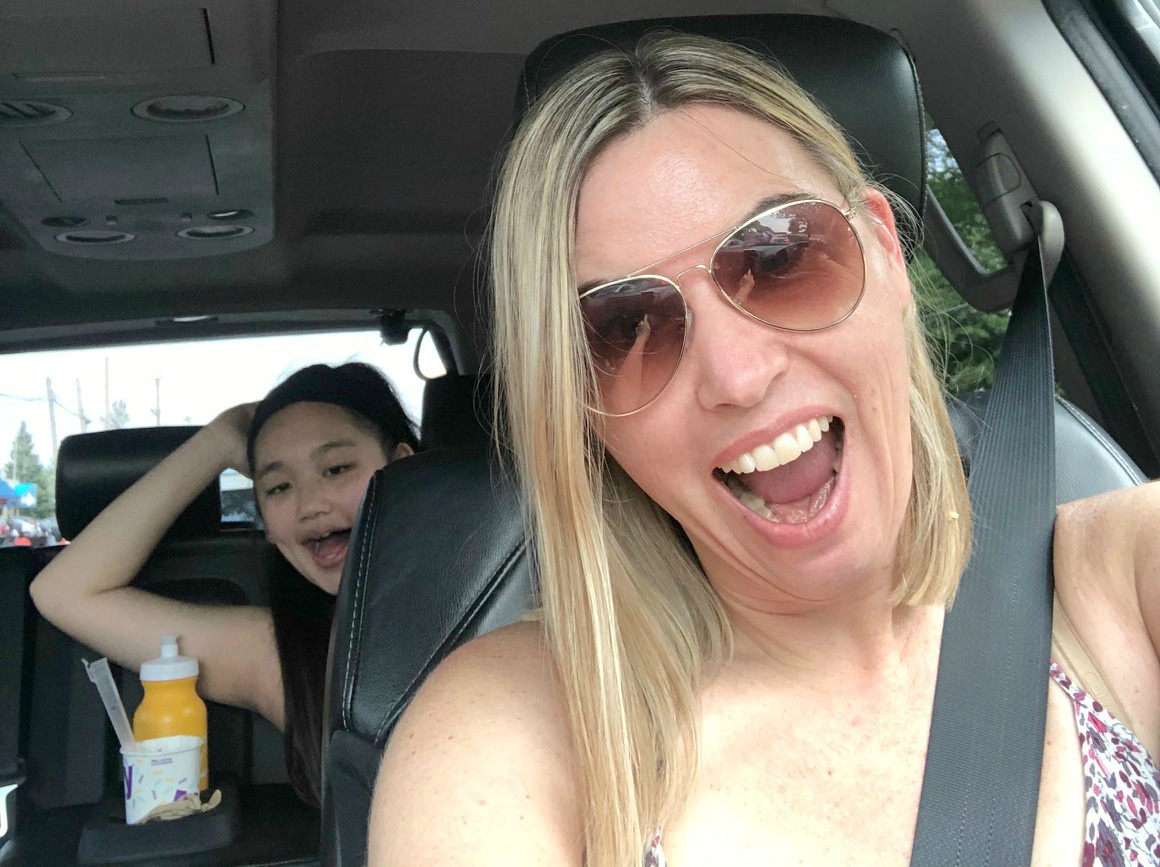 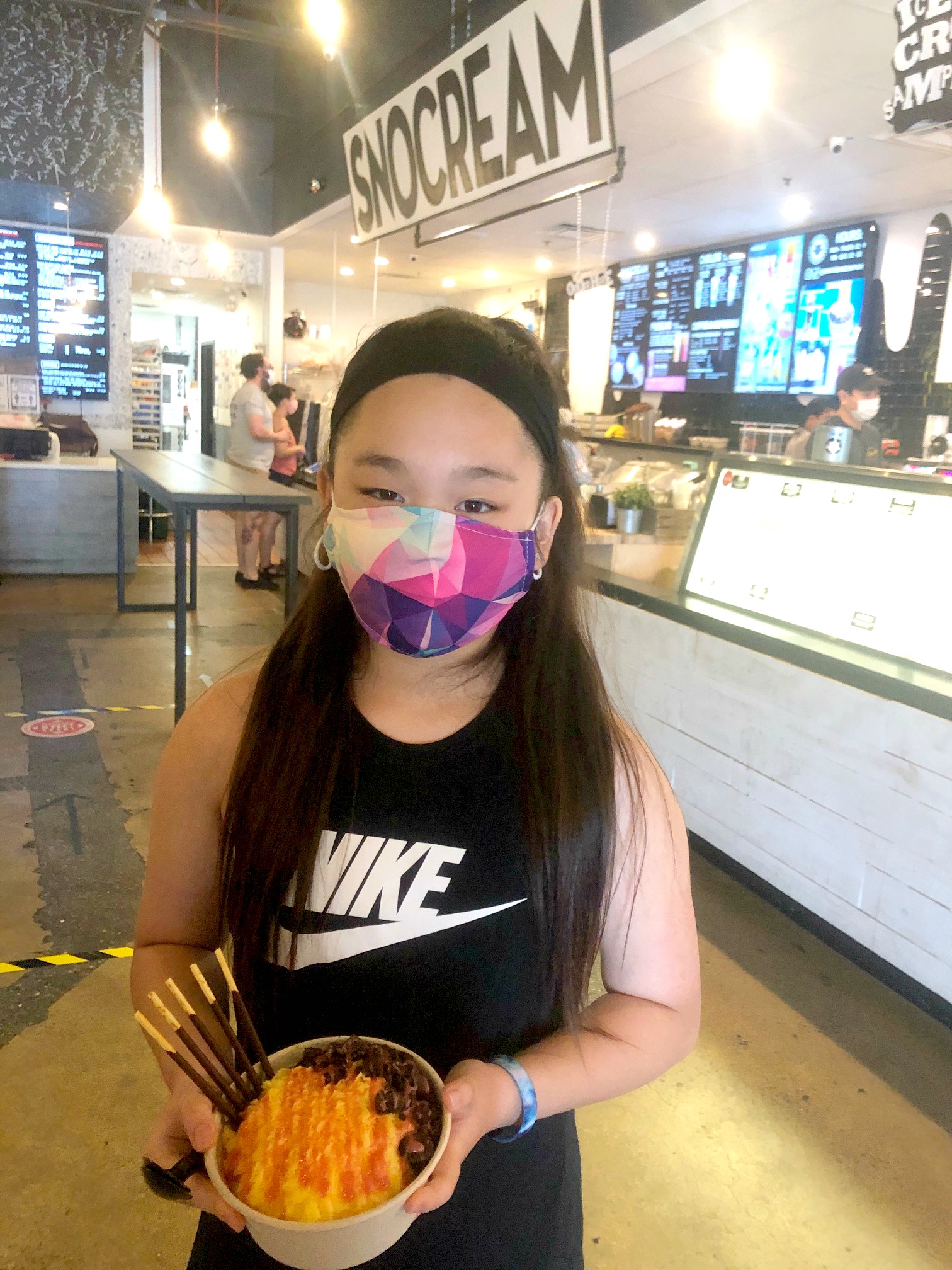 Tucked inside an Asian food hall called The Block, which is itself nestled in the corner of a sparse and rather run down-looking strip mall, we almost gave up hope trying to find the first stop on our crawl. Thank goodness we persisted.

SnoCream serves up a Taiwanese-inspired twist on traditional ice cream, which is a light and fluffy cross between shaved ice and ice cream. It's similar to Korean bingsu, but leans closer to ice cream while bingsoo leans closer to shaved ice, at least in my opinion.

A regular serving gets you your choice of one Sno flavor (they have everything from the more traditional strawberry and cookies and cream to the more exotic black sesame and pandan), two toppings, and a drizzle - all for $6. Add another flavor or toppings for an additional $0.50/each.

Not realizing how gigantic their servings are, we each ordered our own. OMG. 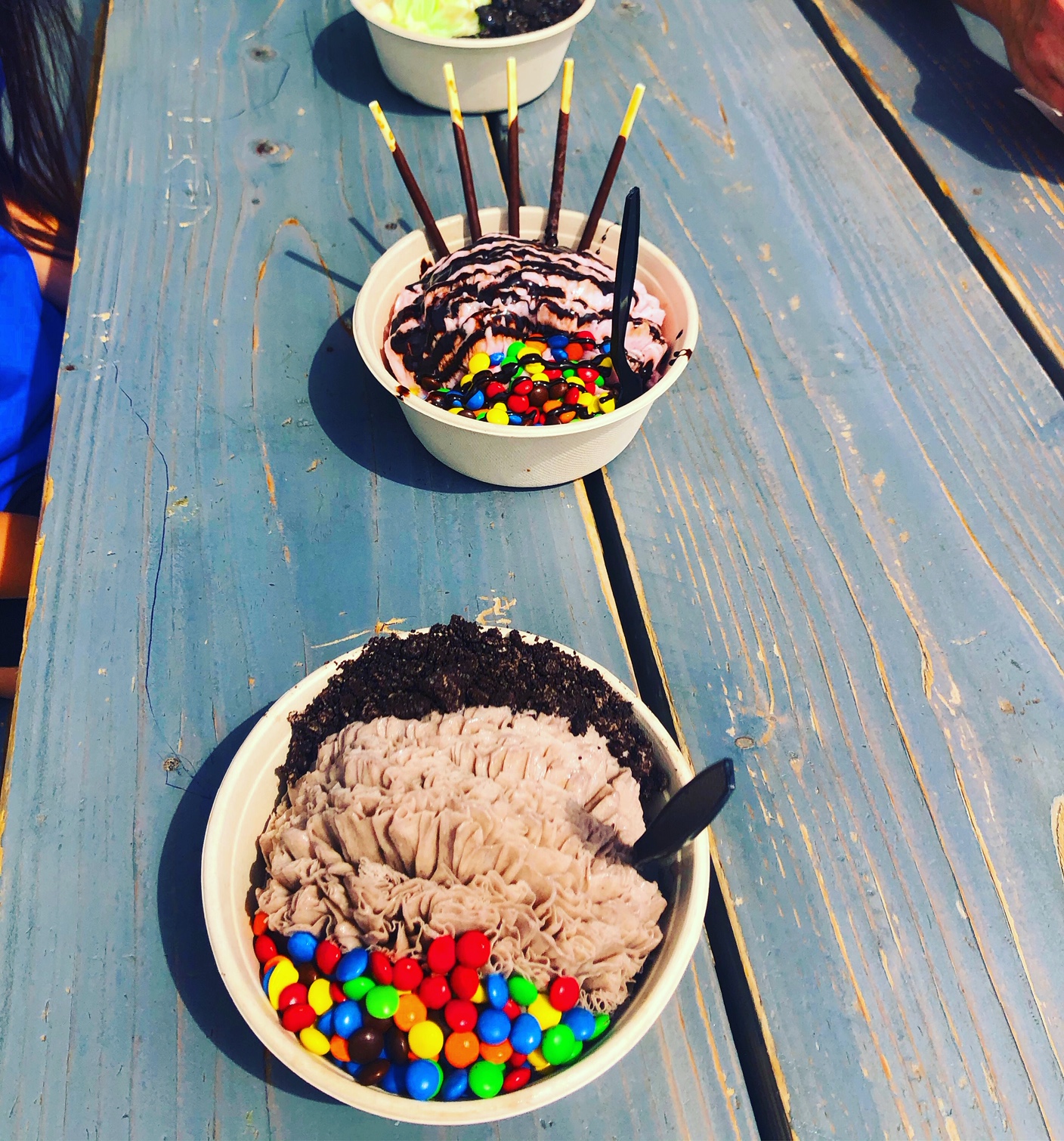 All I can say is, this stuff is a (very large) bowl of pure fluffy, creamy bliss. We knew we shouldn't eat too much since this was only our first stop, but we just couldn't help ourselves.

On a side note, the other Asian eateries inside The Block all looked delicious, and there's even a bar! We'll have to come back for a full meal next time. 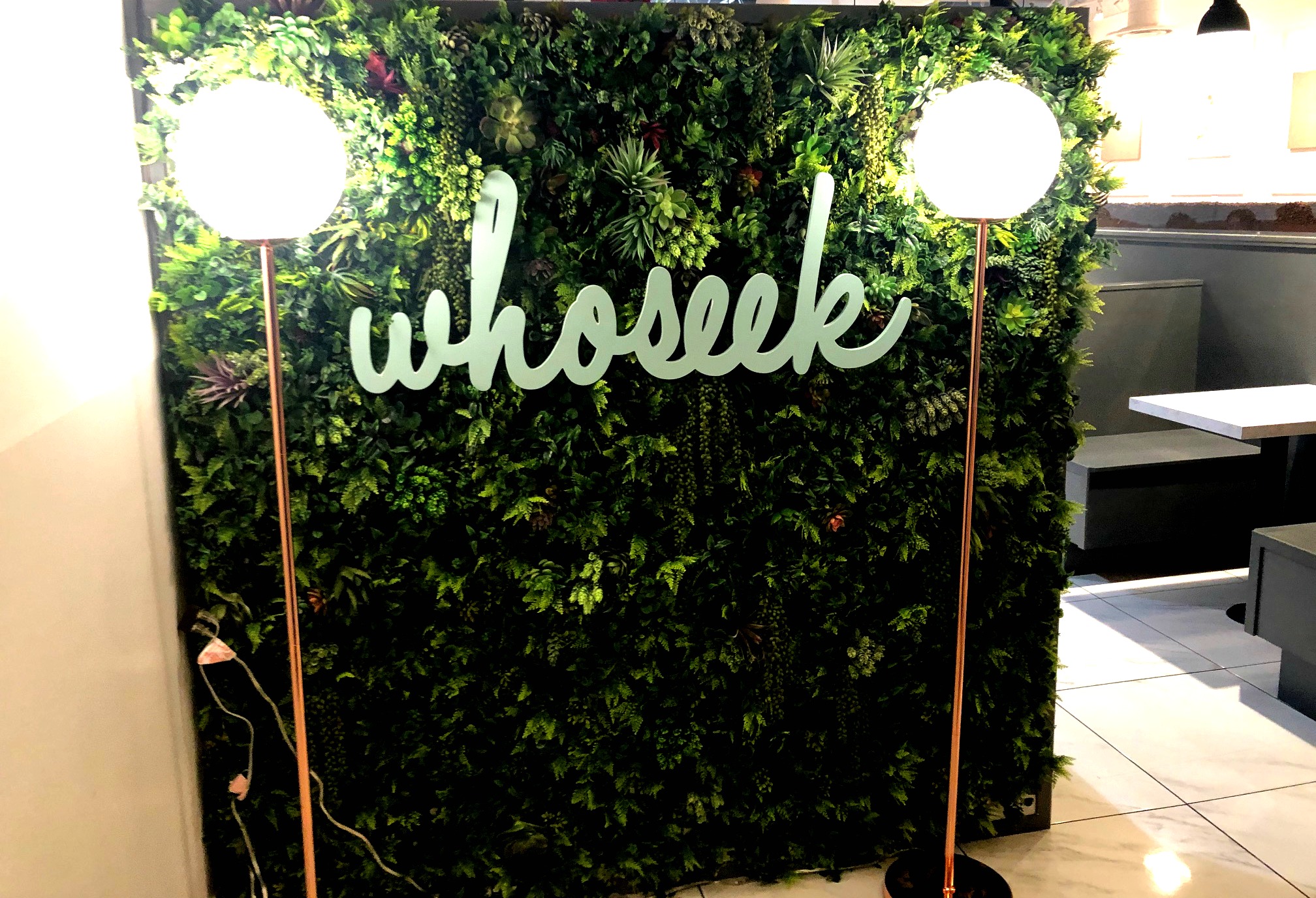 Speaking of bingsu, our next stop was Who Seek, a Korean-style dessert and coffee shop in yet another (slightly less unsightly) strip mall. As an aside, Who Seek is next to one of our all-time favorite Korean restaurants, Taste of Korea.

If you've ever been to Korea (or are a K-drama fan), you will appreciate that this place is everything you'd expect a quintessential, 'cutesy' Korean cafe to be, complete with a magic sliding door at the end of a seemingly dead-end hallway that automatically opens as you approach to reveal a large, secret garden-esque dining room in back.

Lyla has been obsessed with bingsu ever since our trip to Korea last summer, so she was excited to try Who Seek's version, which they call a Snowflake. They have about a dozen Snowflake creations on the menu, including Strawberry, Choco Oreo, Tiramisu, Red Bean, and Green Tea Mochi, among others. 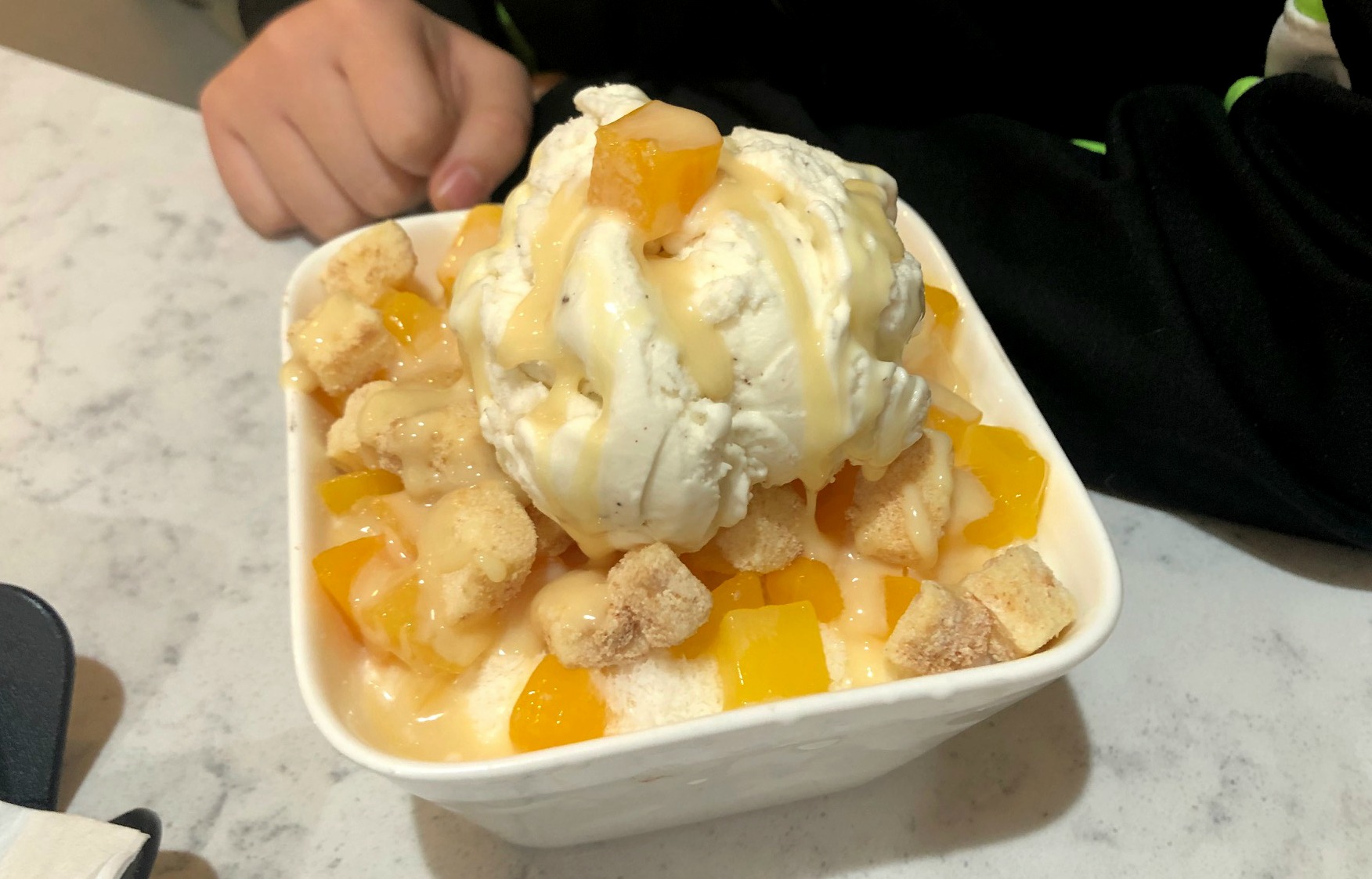 While I would have normally gone the chocolate route, I was still too full of SnoCream to have my own, so Lyla picked out the Mango Cheesecake Snowflake for us to share. This creation consisted of a bed of delicately shaved ice produced from a specialized machine made exclusively in Korea, topped with ice cream, cheesecake and mango chunks, and finished off with a sweet syrup drizzle. YUM. 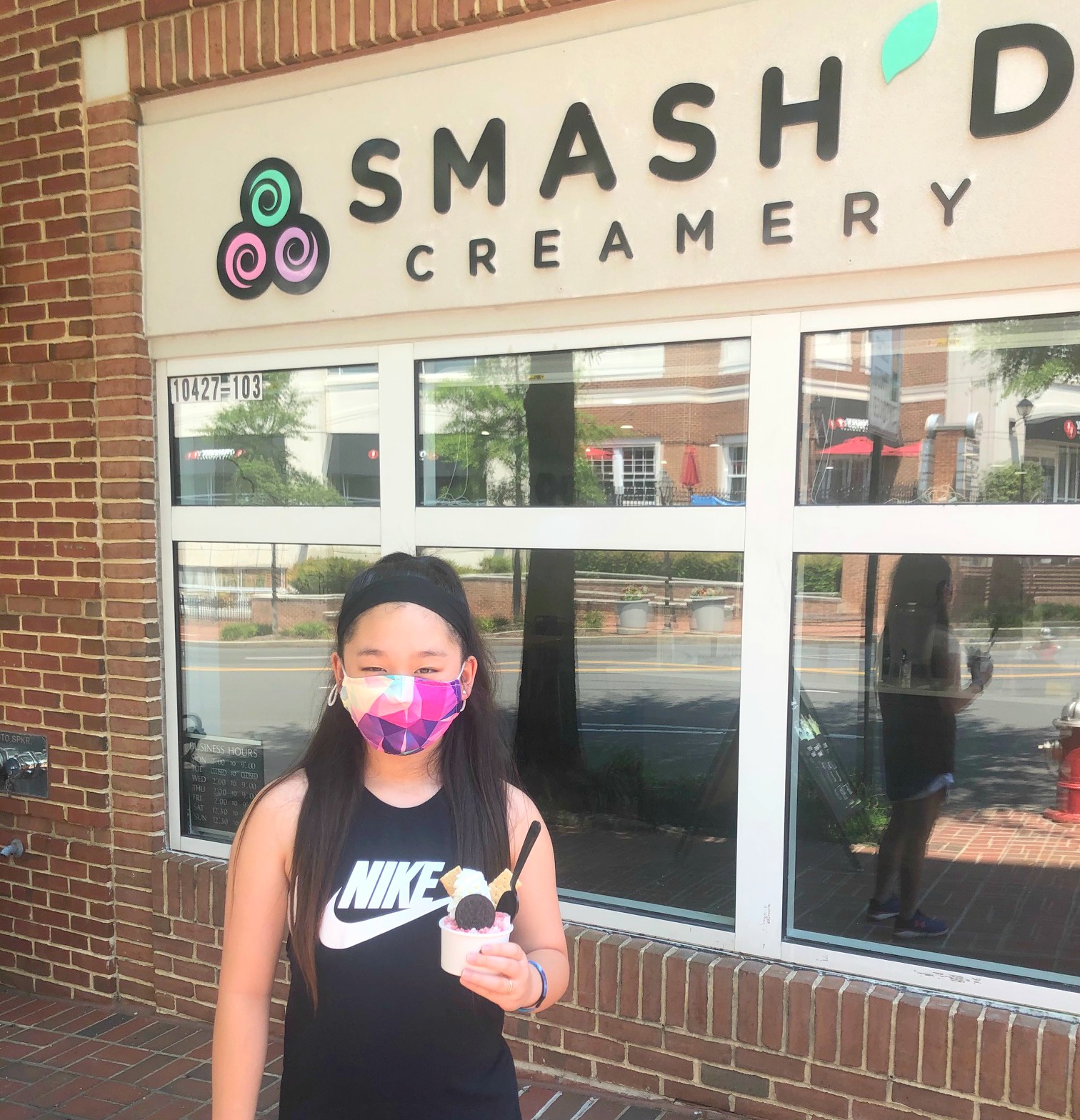 Next, we headed to Smash'D Creamery in Fairfax City. This is the only stop on our crawl that we had been to before. Okay, multiple times before ;-).

Smash'D serves up Thai-style rolled ice cream in a variety of interesting flavors and combinations with creative names like King Kong (banana/Nutella), Nut'N But Trouble (peanut butter/Oreo), It's Choco-Lit (Ghirardelli chocolate, oreo, and choco cookie), Crushing on U-Bae (Ube, which ) and many more. As an added bonus, you can add as many toppings as you want for no extra charge. 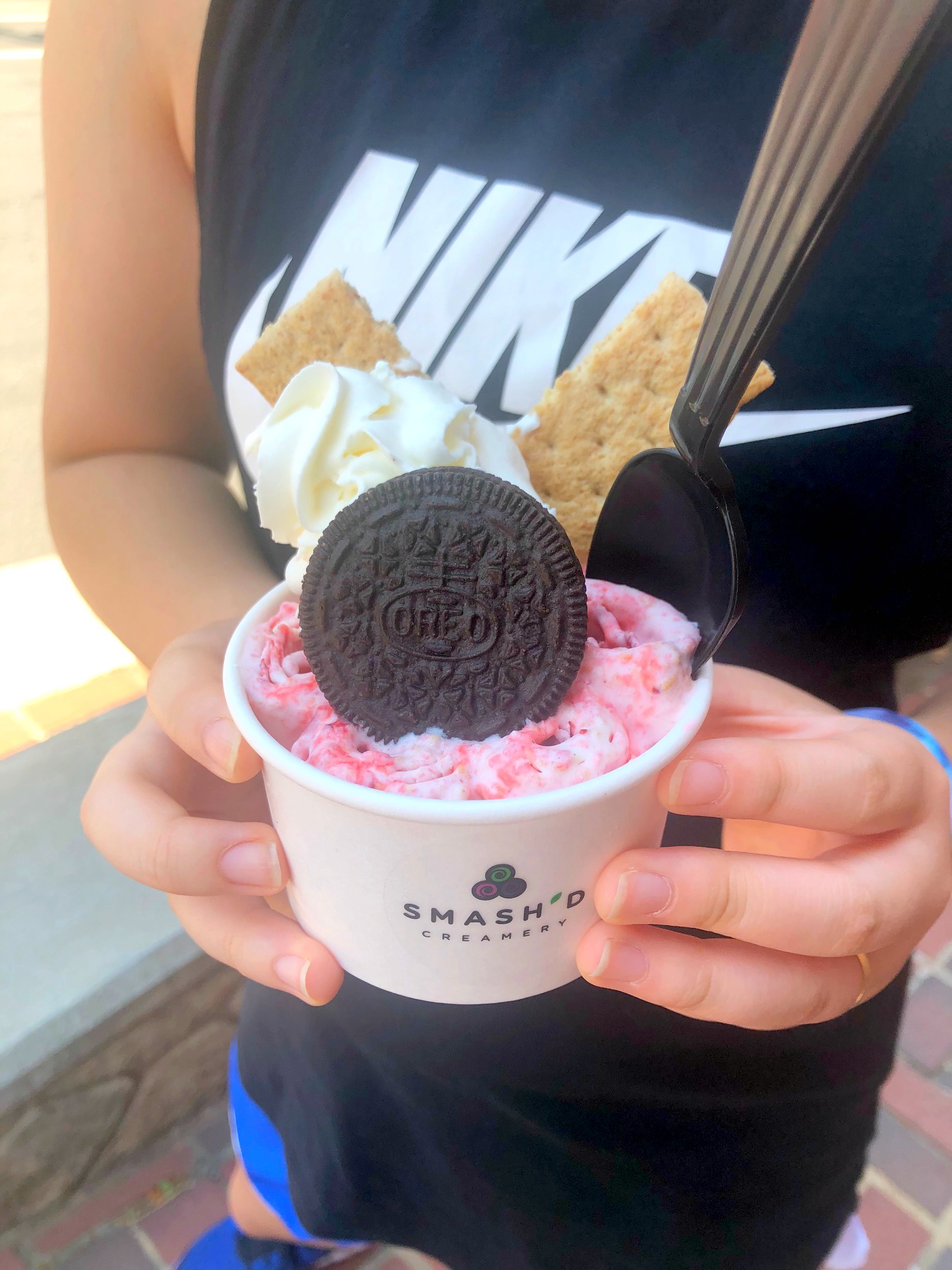 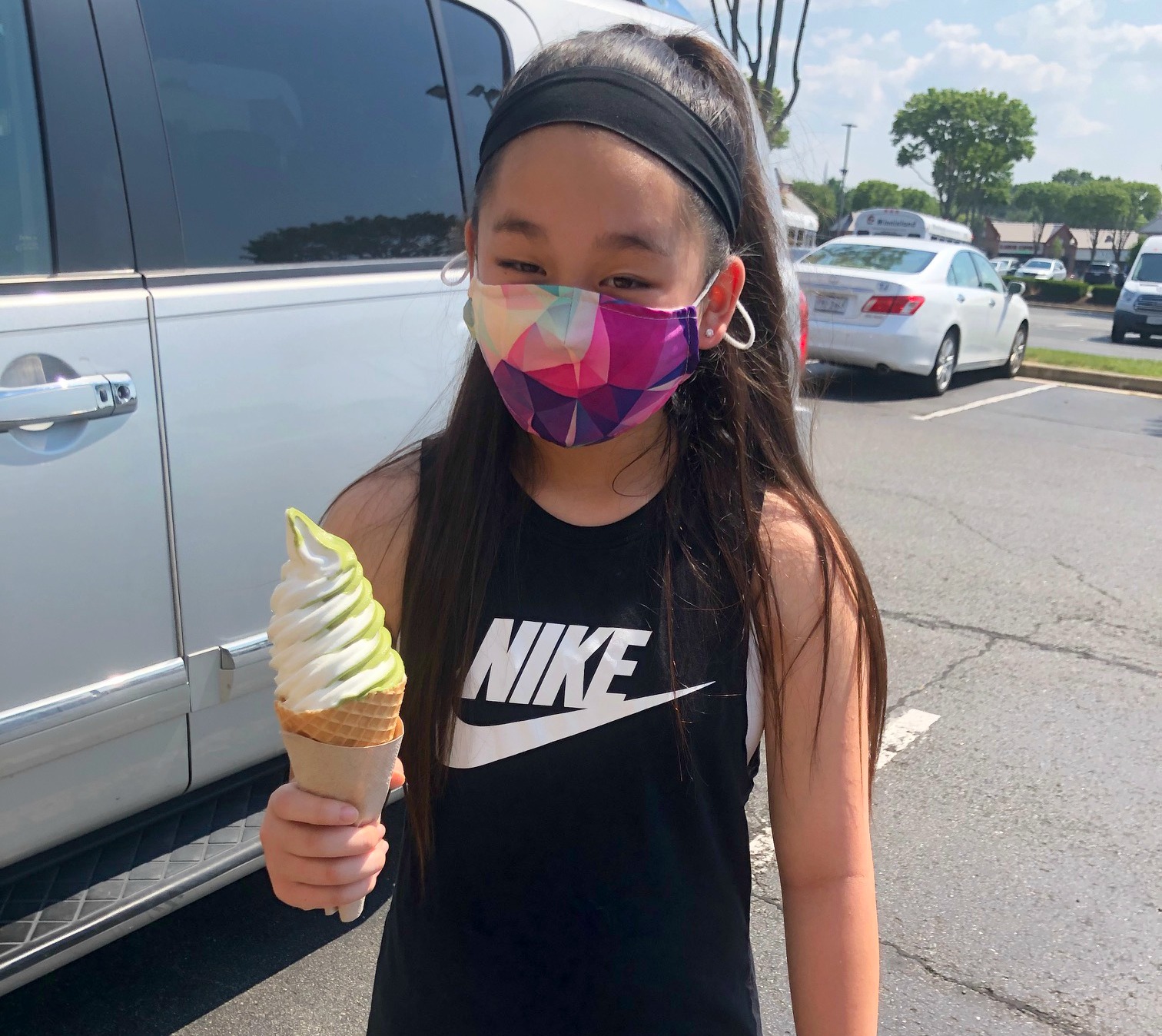 I had never heard of Matcha Cafe Miko before it appeared in my Google search results, but it seemed unique and got great reviews, so off we went. When we pulled up on a blazing hot Saturday afternoon, the line was insane - a good indicator that we made a solid choice.

As their name suggests, Matcha Cafe Miko serves up a variety of matcha-based treats. Their matcha is imported straight from Uji, Japan and all of their products are made in-house. If you are a matcha fan, this is your heaven. There is matcha shaved ice, matcha parfaits, matcha soft serve, matcha floats, matcha lattes, matcha frappes, and on and on it goes.

Neither Lyla nor I are big tea fans, so we decided to go simple and order the vanilla/matcha soft serve swirl cone. I was concerned going straight matcha would be a bit too bitter for my taste buds, and I was right. We were glad to have the sweetness of the vanilla mixed in. 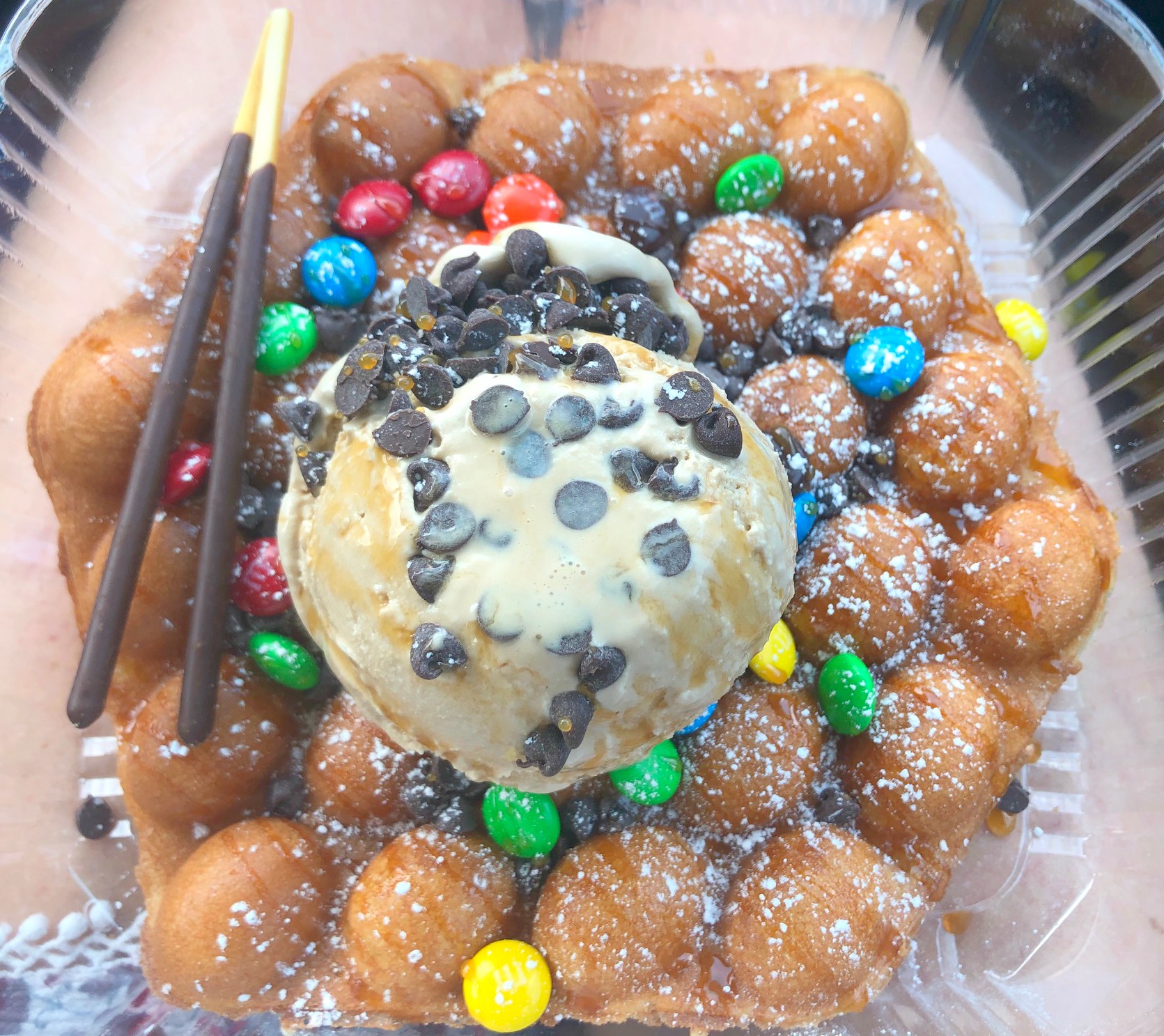 At this point in our crawl, we seriously considered aborting mission. I honestly didn't think it possible, but apparently you CAN in fact reach a point where you no longer feel like eating ice cream. Shocking, I know. But we had been wanting to try Iron Ice for a really long time, so we rallied. And oh man, we were so glad we did.

Iron Ice claims they are "the only dessert shop in Northern Virginia that specializes in puffle," which it turns out is a popular street food in Hong Kong that's like a sweet version of a waffle that's crispy on the outside and fluffy on the inside. 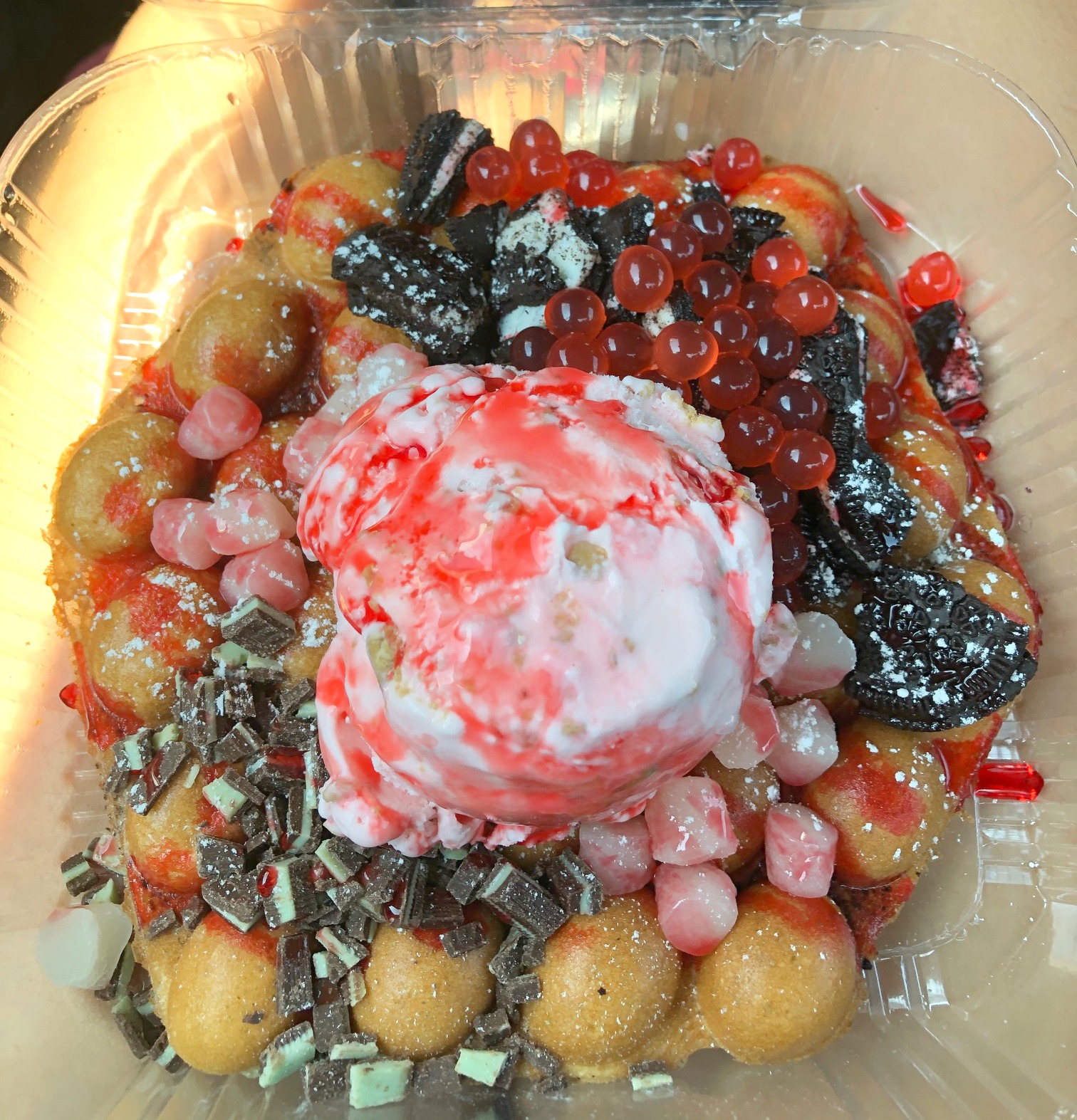 You can create your own puffle ice cream creation with your choice of puffle flavor - original, chocolate, matcha, toasted coconut or chocolate toasted coconut - ice cream, toppings and drizzle, or you can choose from one of Iron Ice's pre-set puffle creations. You can also purchase ice cream without the puffle, but that would just be stupid.

All in, our crawl took a whopping five hours between all the driving, ordering, waiting and eating. Lyla said it was one of her "favorite birthdays ever!" Score one for mom.